The majority of reporters and editors now depend on social media sources when researching their stories, according to a new survey by Cision and George Washington University.

Among the journalists surveyed, 89 percent said they turn to blogs for story research, 65 percent to social media sites such as Facebook and LinkedIn, and 52 percent to microblogging services such as Twitter. In addition, 61 percent use Wikipedia.

While the results indicate the fast growth of social media as a well-used source of information for mainstream journalists, the survey made it clear reporters and editors are highly aware of the need to verify information they get from social media. Eighty-four percent said social media sources were "slightly less" or "much less" reliable than traditional media, with 49 percent saying social media suffers from "lack of fact checking, verification and reporting standards."

"Mainstream media have clearly hit a tipping point in their reliance on social media for their research and reporting," said Heidi Sullivan, Vice President of Research for Cision. 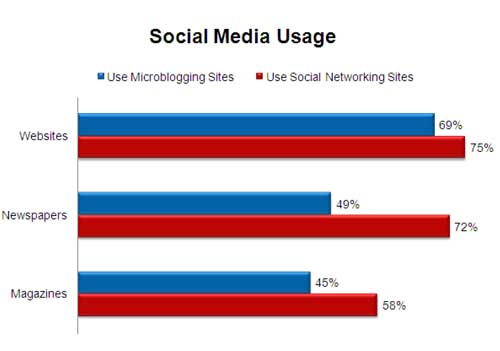 "However, it’s also clear that while social media is supplementing the research done by journalists, it is not replacing editors’ and reporters’ reliance on primary sources, fact-checking and other traditional best practices in journalism."

The survey also found, most journalists turn to public relations people for assistance in their primary research.  Editors and reporters said they rely on PR people for "interviews and access to sources and experts" (44%), "answers to questions and targeted information" (23%), and "perspective, information in context, and background information" (17%).

"Social media provides a wealth of new information for journalists, but getting the story right is just as important as ever," said Don Bates, founding director of the GWU Strategic Public Relations program, and writing/media relations instructor.

"As PR professionals increasingly utilize social media as a means of communicating, they have a bigger responsibility than ever to ensure the information they provide journalists is accurate and timely, provide access to the primary sources who can verify the facts, and be knowledgeable enough to provide accurate background and context."

> Social Media Will Not Replace Search

> People 18-24 Would Rather Give Up Social Networks Than Email

> Consumers Are Looking for Offers on Social Networks