More than a third (37%) of traditional journalists now contribute to Twitter and 39 percent produce content for a blog as part of their expanded duties, according to a new PRWeek/PR Newswire Media Survey.

"Across the board you can see a change in journalists’ behavior," said Sarah Skerik, VP of distribution services at PR Newswire.

"Journalists are doing more with less. They seem to be acting more aggressively about finding their stories, digging a bit deeper for story angles."

Journalists are using social networks to help find story ideas, with 24 percent reporting they consider sites like Facebook and Twitter an important way to connect with experts, an increase from 13 percent in 2009. In addition, 46 percent of journalists say they sometimes or always use blogs for research; 33 percent report using social networks in their research, compared to 24 percent in 2009. 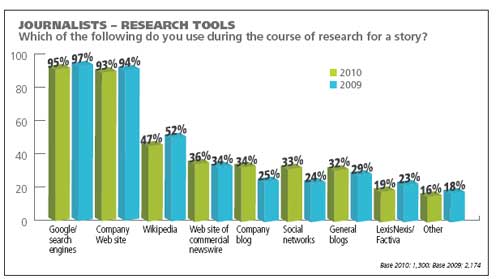 The popularity of social media has impacted how media professionals are interacting with the PR industry. Overall, 43 percent of journalists have been pitched through social networks, compared to 31 percent in 2009.

"Coverage oftentimes comes from building a relationship with a journalist, and it’s becoming more frequent in the industry to establish those relationships through
social media," says Amy Prenner, founder of the LA-based Prenner Group.

Overall, 59 percent of traditional journalists are the author of a blog, either personal or professional, and 31 percent are writing a blog for their traditional outlet, an increase from 28 percent in 2009.

"Heavier workloads, shorter deadlines, and increased competition are causing journalists to seek out new sources of information to help them get their jobs done, including social networks," said Erica Iacono, executive editor of PRWeek.