Judging by the latest developer survey results from Appcelerator, Android’s future has become brighter than ever.  Exactly 59 percent of the developers involved wagered that it had the best long-term outlook, which isn’t bad by itself and represents a significant rise since June.

A little background data: in June, 54 percent of participating developers bet on Android, and 40 percent bet on iOS, so as the graphic below shows, the gap is definitely widening. 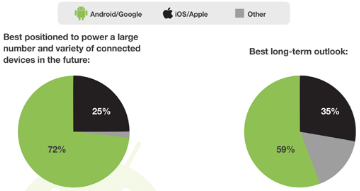 What’s more, 56 percent of developers said they consider Android to have the most capabilities as an operating system, and a whopping 85 percent of them indicated it’s the most open platform.

Of course, in fairness to Apple, we should note that most of Android’s would-be wins haven’t actually occurred yet.  Appcelerator explained in a statement, "Apple iOS continues to dominate in all categories relating to market/revenue opportunity and current devices.  iPhone continues to lead overall developer sentiment with 91% saying they are ‘very interested’ in developing for the device compared to 82% for Android phones."

So the war between the two companies and mobile operating systems is sure to continue for quite a while.

RIM might not be out of the rivalry, either, with new info from StatCounter and Royal Pingdom indicating that its user are spending more time on the Web every month.