More than one-third (35%) of U.S. businesses have had success using social media to attract new business, according to a new survey from Regus.

The U.S. lags slightly behind the global average, with 40 percent of businesses globally having successfully used social media for business development.

Globally, social networks are still used for their original purposes. The most popular use of social networks is staying in touch with business contacts, with 58 percent of respondents globally indicating they use networks in this way.  Joining special interest groups is also popular (54 percent). 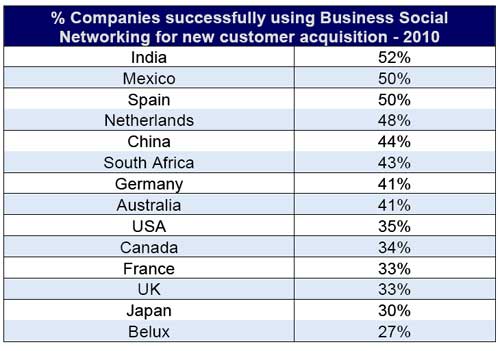 Although a number of skeptics (34 percent) believe social networking will never become a significant method of connecting to customers and prospects, 51 percent of companies globally organize, connect to or manage customer groups via social networks. Fifty four percent of firms use social networks to find useful business information. Only 22 percent of respondents had found new employment through social networking, in spite of the specific job search functions of networks such as LinkedIn.

"While the most popular function of these networks remains that of keeping in touch with contacts, businesses are also successfully acquiring new customers, supporting their retention efforts and interacting with customer groups," said Sande Golgart, vice president for Regus.

"With 55 percent of online Americans registered on Facebook, any reservations towards using social networking for business purposes seem misplaced. This survey indicates that organizations who have not yet ventured into the world of social networking may be missing out on sizeable business opportunities. This is particularly the case in the Netherlands (48 percent), India (52 percent), Mexico (50 percent) and Spain (50 percent), where the highest level of new customer acquisition via social networking was reported."