More Americans are turning to government agencies websites for information, according to new research from Pew Internet & American Life Project.

Some 40 percent of Internet users have gone online for raw data about government spending and activities.

Online activities related to the government include:

*22% have read or downloaded the text of legislation

*16% have visited a site such as data.gov that provides access to government data

"Government interactions in the information age are often fueled by data," said Aaron Smith, a research specialist at Pew and author of the report.

"Online citizens can-and often do-‘go to the source’ in their efforts to monitor government activities, evaluate the impacts of new legislation, and track the flow of their tax dollars." 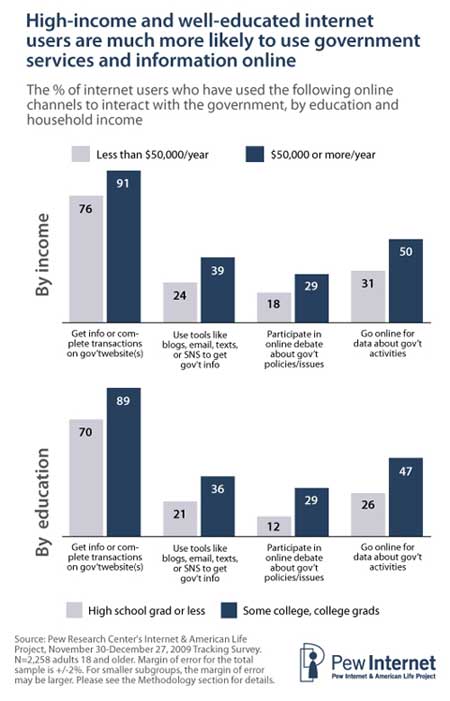 The report also found 31 percent of online adults have used social media such as blogs, social networking sites, and online video as well as email and text alerts to keep up to date about government activities.

Minorities are just as likely as whites to use social media to keep up with the government, and are more likely to agree that government outreach using these channels make government more accessible and helps people be more informed about what government agencies are doing.

"Just as social media and just-in-time applications have changed the way Americans get information about current events or health information, they are now changing how citizens interact with elected officials and government agencies," said Smith.

"People are not only getting involved with government in new and interesting ways, they are also using these tools to share their views with others and contribute to the broader debate around government policies."