The number of people viewing video on mobile devices has increased 66 percent in the past year to 12.1 million mobile consumers in the EU5 (U.K., France, Germany, Spain and Italy), according to a new report from comScore. 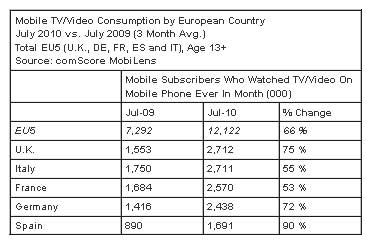 On demand video/TV programming saw significant growth in the past year, up 99 percent since July 2009, with 5.2 million mobile users across Europe. Viewing broadcast TV is also increasing, up 70 percent to 3.5 million subscribers.

“The era of ‘video-on-the-go’ has finally arrived,” says comScore European VP Mobile, Jeremy Copp. “We’ve seen major developments throughout the mobile space – in networks, in devices and in software and applications – and now we’re seeing the result: a rapidly growing audience of consumers accessing video on their mobiles, be it broadcast, on-demand or sideloaded.”

“Smartphone owners are clearly driving the mobile video trend, an indication that more growth is on the horizon as an increasing number of smartphones hit the market,” said Copp.

“We’ve also seen that recent releases such as Apple’s iPad and Samsung’s Galaxy Tab are designed to offer an incredible video experience, and when coupled with services such as the BBC iPlayer for mobile, make this an extremely interesting sector to watch.”