Social networking now ranks as the fastest-growing mobile content category, according to a new report from comScore.

"With mobile media consumption on the rise, the discussion of how consumers are accessing content — whether it is via application, browser or both — continues to be an important factor for companies looking to invest further in their mobile brands," said Mark Donovan, comScore senior vice president of mobile.

"Although application access is clearly on the rise, with several categories more than doubling their audience via this method, content consumption via browser continues to be the most popular method for Americans to access mobile media."

"Although growth in application usage on smartphones continues to grab the spotlight in the mobile market, the audience using their mobile browser remains larger and is growing just as quickly," added Donovan.

"Brands need to remember to take into consideration the user experience across both channels when building their mobile strategies." 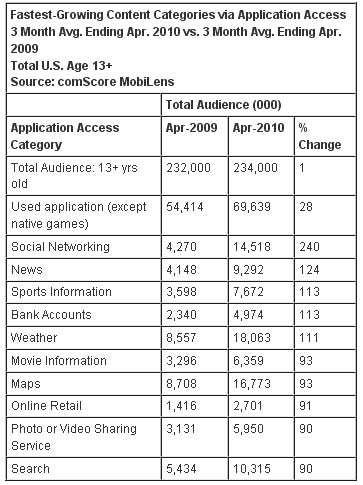 "Social networking is by far the fastest-growing mobile activity right now. With 20 percent of mobile users now accessing social networking sites via their phone, we expect to see both application and browser usage continuing to drive future consumption of social media,’ said Donovan.