In November 2010, the number of U.S. visitors to web-based email sites decreased 6 percent compared to the previous year, while email engagement declined at a greater rate, according to a new report from comScore.

During the same time period, the number of users accessing email via their mobile devices grew by 36 percent.

“Digital communication has evolved rapidly in the last few years with an ever-increasing number of ways for Internet users to communicate with one another,” said Mark Donovan, comScore senior vice president of mobile.

“From PCs to mobile devices, whether its email, social media, IM or texting, consumers have many ways to communicate and can do so at any time and in any place. The decline in web-based email is a byproduct of these shifting dynamics and the increasing availability of on-demand communication options.”

In November 2010, more than 153 million people visited web-based email providers, decreasing 6 percent from the previous year. In terms of engagement, overall time spent in the email category declined 9 percent, while total pages viewed dropped 15 percent. Despite such declines, however, it should be noted that email remains one of the most popular activities on the web, reaching more than 70 percent of the U.S online population each month. 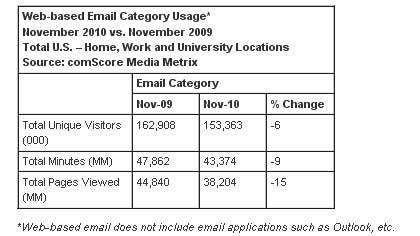 An analysis of email users’ demographic characteristics revealed that young users, those between the ages of 12-17 showed the largest decline in usage during the past year. The number of visitors from this age segment declined 24 percent, while engagement fell by half as total minutes decreased 48 percent and total pages dropped 53 percent. Engagement also declined among users 18-54, as a general shift in email behavior was evident across most segments.

In contrast, usage increased among those 55 and over. The number of 55-64 year olds accessing web-based email increased 15 percent with similar gains in engagement, while those age 65+ experienced gains across all three metrics as well. When looking at email usage among males and females, males displayed a more dramatic decline in usage than females, with total email minutes falling 12 percent for males compared to 7 percent among females.

While web-based email has declined over the past year, email usage via mobile devices has seen significant growth. In November 2010, 70.1 million mobile users (30 percent of all mobile subscribers) accessed email on their mobile, an increase of 36 percent from the previous year. Daily usage of email showed an even greater increase growing 40 percent as 43.5 million users turned to their mobile devices on a nearly daily basis for their email communication needs. 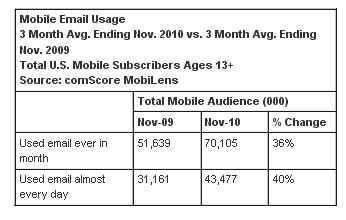 “What we have seen in the smartphone era is the rapid acceleration of data consumption, which has helped drive mobile usage across multiple categories including email,” said Donovan.

“In a relatively short period of time, adoption of mobile email has reached 78 percent of the smartphone population, which is very similar to the penetration of web-based email among Internet users. These findings demonstrate just how quickly channel shifts can occur and why it’s now essential for media brands to have a strong presence in both arenas.”