Nearly half of all American adults (47%) get at least some local news and information on their cellphone or tablet computer, according to a new report.

These findings come from a survey of 2,251 conducted in January by the Pew Research Center’s Internet & American Life Project and Project for Excellence in Journalism, in partnership with the John S. and James L. Knight Foundation.

The information people search for on mobile platforms is practical and real time: 42 percent of mobile device owners say they get weather updates and 37 percent get information about restaurants or other local businesses on their phones or tablets. 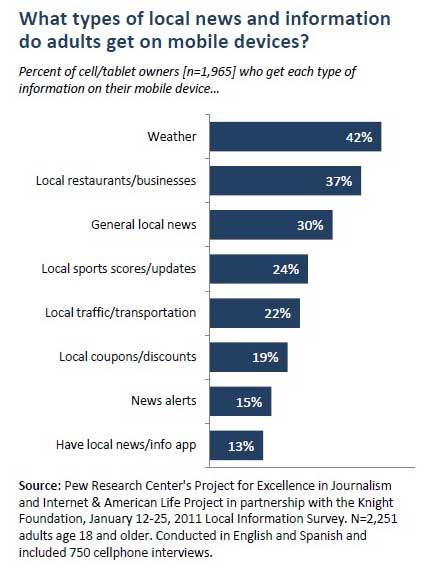 Just 13% of all mobile device owners report having an app that helps them get local information or news, which represents 11% of the total American adult population. While almost half of adults get local news on mobile devices, just 1 in 10 use apps to do so. Call it the “app gap.”

“Many news organizations are looking to mobile platforms, in particular mobile apps, to provide new ways to generate subscriber and advertising revenues in local markets,” noted Lee Rainie, Director of The Pew Research Center’s Internet & American Life Project. “The survey suggests there is a long way to go before that happens.”

One question in the news industry is whether the willingness to pay for online content would grow if people faced the prospect of their local media not surviving. Asked about the value of online access to their local newspaper, 23% of survey respondents say they would pay $5 a month to get full access to local newspaper content online. When asked if they would pay $10 per month, 18% of adults say yes. Both figures are substantially higher than the percentage of adults (5%) who currently pay for online local news content. Nonetheless, roughly three-quarters say they would not pay anything.

When asked about the value of their local newspaper:

*28% of Americans say the loss of the local newspaper would have a major impact on their ability to keep up with local information.

*30% say it would have a minor impact

*39% say the loss of the newspaper would have no impact.

“While on the surface these findings may look bad for news organizations, there is some potentially good news in the data. We found that adults who consume local news on mobile devices are almost twice as likely as other adults to say they would be willing to pay to access their local newspaper online,” said Kristen Purcell, Associate Director for Research at the Pew Internet Project.

“The percentage willing to pay is even higher among local app users, so there’s evidence that this new mobile local news consumer sees value in their local newspaper.”