More than a third (35%) of U.S. adults have applications or “apps” on their phones, yet only 24 percent of adults use those apps, according to a new report from the Pew Internet & American Life Project.

Many adults who have apps on their phones, particularly older adults, do not use them, and 11 percent of cell owners are not sure if their phone has apps. 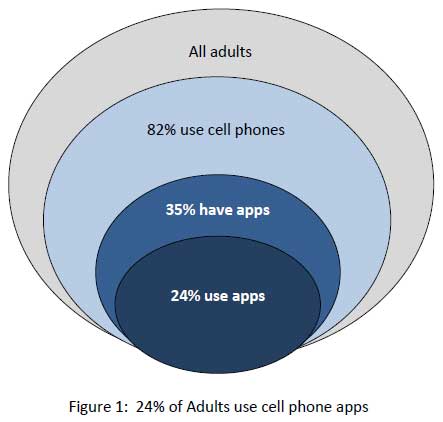 “Still, it is clear that this is the early stage of adoption when many cell owners do not know what their phone can do.  The apps market seems somewhat ahead of a majority of adult cell phone users.”

Apps use does not rank at the top of non-voice cell phone activities people use on the handhelds. More than seven in ten cell owners take pictures on their phones (76%) and use their phones to send/receive text messages (72%).

Nearly half (47%) of app downloaders have paid for an app, with the rest saying they only download free apps. This means that one in eight adult cell phone users (13%) has paid to download an app, with most paying less than $3.

Cell phone screen real estate is valuable for some users. Majorities of apps users say they organize their apps so that the most frequently used are easily accessible (59%), and that they delete apps from their phones that are not useful or helpful (56%).

*18-29 year-olds make up only 23% of the total U.S. adult population but constitute almost half (44%) of the apps using population.  In contrast, while 41% of the adult population is age 50 and older, that age group makes up just 14% of apps users.

Bing Takes #2 Spot in Search, Even Without Yahoo's Help