Millennials are expected to make online sharing a lifelong habit, according to new research from Pew Internet and Elon University.

In an online survey of 895 technology stakeholders and critics, 67 percent agreed with the following statement:

"By 2020, members of Generation Y (today’s "digital natives") will continue to be ambient broadcasters who disclose a great deal of personal information in order to stay connected and take advantage of social, economic, and political opportunities. Even as they mature, have families, and take on more significant responsibilities, their enthusiasm for widespread information sharing will carry forward."

Some 29 percent agreed with the opposite statement:

"By 2020, members of Generation Y (today’s "digital natives") will have "grown out" of much of their use of social networks, multiplayer online games and other time-consuming, transparency-engendering online tools. As they age and find new interests and commitments, their enthusiasm for widespread information sharing will abate." 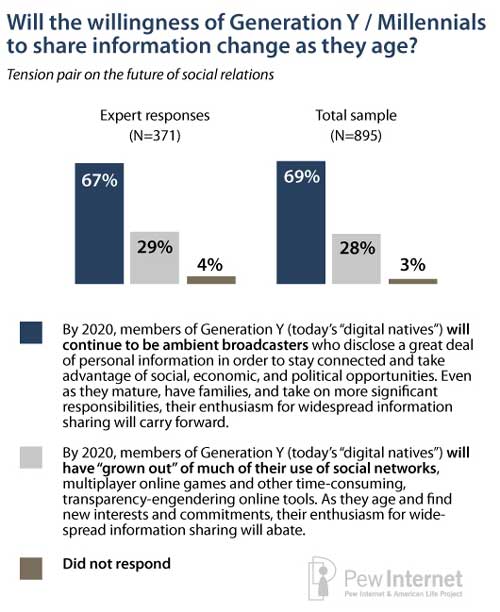 Most of those surveyed believed the sharing of personal information online has many social benefits as people open up to others in order to build friendships, form and find communities, seek help, and build their reputations. They said Millennials have already seen the benefits and will not reduce their use of these social tools over the next decade as they take on more responsibilities while growing older.

"The majority noted that new social norms that reward disclosure are already in place among the young," said Pew Internet Director Lee Rainie.

"Some experts also expressed hope that society will be more forgiving of those whose youthful mistakes are on display in social media such as Facebook picture albums or YouTube videos."

Nearly 30% of respondents said the abundant sharing of personal information on social networks by young people will fade, most of them noting that life stages and milestones do matter and do prompt changes in behavior.

Among other things, many of the dissenting experts also said Millennials will not have as much time in the future to devote to popular activities such as frequently posting to the world at large on YouTube, Twitter or Facebook about the details of their lives.

"Some of the experts said an awkward trial-and-error period is unfolding and will continue over the next decade, as people adjust to new realities about how social networks perform and as new boundaries are set about the personal information that is appropriate to share," said Janna Anderson, director of the Imagining the Internet Center and a co-author of the study.

Will Search Become a Public Utility?