Microsoft Moves Tag Out Of Beta

Microsoft has moved its mobile barcode technology, Tag out of beta after 18 months of testing.

Users can download the Microsoft Tag app on their smartphone, take a photo of the Tag and be directed to a website, view a text message or linked to a phone number.

Microsoft says since its beta launch more than 1 billion Tags have been printed globally and in April more than 20 million magazine with Tags were in the hands of U.S. consumers. 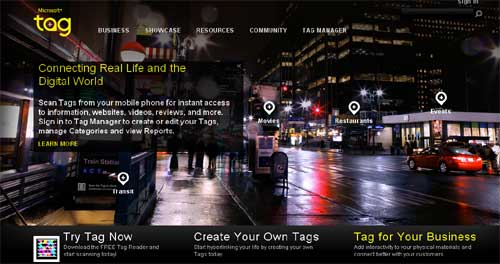 "We’ve already seen a lot of enthusiasm for Tag among marketers, developers and consumers as well as a diverse range of creative scenarios using Tag in industries as varied as publishing, advertising, retail, real estate, transit, automotive, consumer packaged goods, tourism and entertainment," Microsoft said in a blog post.

"This past week, for instance. Amsterdam became the second world city with a Tag-led tour, with Tags on monuments, museums, restaurants, bars, and other landmarks. The Mall of America, in Minnesota, has announced plans to use Tag to help enhance customer engagement and give retailers an interactive tool to promote their products."

Microsoft said it will be introducing analytics, reporting and real-time location services for Tag clients in the future.

Logitech Talks About its Role in Google TV

May 28, 2010
Latest Posts
Registration is disabled.