With respect to the online video industry, new data from comScore indicates that February was an eventful month.  Sites gained and lost millions of unique visitors, causing the top ten list of online video properties to change in significant ways compared to January.

Google’s sites are of course still at the top of the list; it would take changes involving tens of millions of people to cost the search giant its lead.  But the company’s unique viewer count did drop from 144.1 million to 141.1 million on a month-over-month basis, and the minutes per viewer count decreased a lot, as well.

Now for the bigger shakeups.  Microsoft replaced VEVO in the number two spot, moving up from seventh place and gaining 10.7 million visitors between January and February.  Then Yahoo stayed in third, and Facebook knocked Viacom out of fourth place.

Next, fifth place went to VEVO in February (as opposed to AOL in January), Viacom got sixth (instead of Facebook), and AOL got seventh (rather than Microsoft). 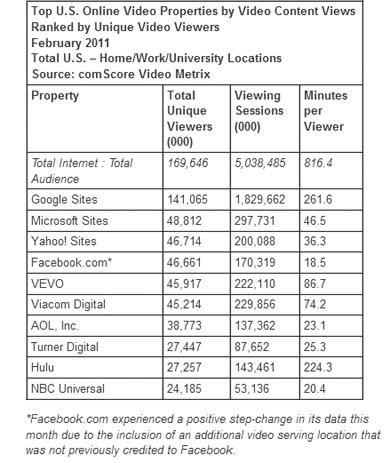 Don’t be surprised if there are more major changes in March and the months ahead.  Sports fans’ basketball viewing habits are likely to have a big effect on things, after all, and Google’s ramping up its efforts with respect to professional-quality video.

We’ll be sure to report those numbers to you as soon as they’re available (assuming the industry hasn’t quieted down to the point of being dull).

Google Analytics Gets an Upgrade