The claim, filed in the U.S. District Court of the Western District of Washington, alleges that these companies have infringed upon patents held by Interval. The patents in question include: 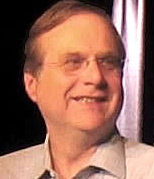 "Interval Research was an early, ground-breaking contributor to the development of the internet economy," said David Postman, a spokesman for Allen, in a statement. "Interval has worked hard to bring its technologies to market through spinning off new companies, technology transfer arrangements, and sales of its patented technology."

The statement says that the patents are "fundamental to the ways that leading e-commerce and search companies operate today."

"This lawsuit is necessary to protect our investment in innovation," Postman added. "We are not asserting patents that other companies have filed, nor are we buying patents originally assigned to someone else.  These are patents developed by and for Interval."

Interval says that it helped fund Sergey Brin’s and Larry Page’s research that resulted in Google.

The legal document can be viewed here (pdf), courtesy of ZDNet.