Facebook, with its 500 million active users and (unofficial) movie and books, is also quite the hit with small businesses, according to a new report.  MerchantCircle found that Facebook is the favorite online marketing service of small businesses, and Facebook Places is doing quite well, too.

To sort of set the stage: the Merchant Confidence Index survey involved 8,456 U.S. local business owners, and was conducted between January 22nd and February 3rd.  So the results aren’t especially subjective or dated.

Otherwise, we’ll just note that the answers we’re focusing on came in response to the question, "Are you promoting your business with the following websites/services?" 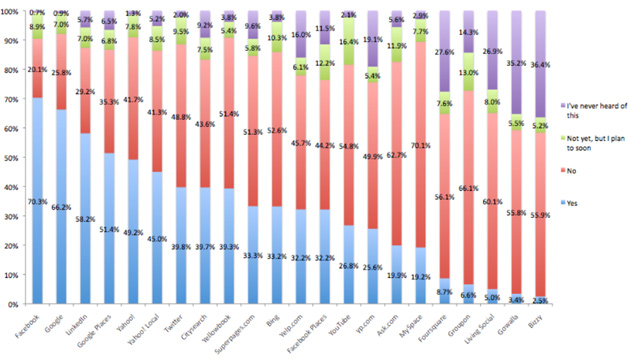 As the above graph shows, the vast majority of small business owners are already making use of Facebook, and about one-third of the holdouts have plans to follow suit.  Not many people have either turned their back on Facebook or somehow altogether missed the phenomenon.

Meanwhile, Facebook Places is well ahead of Foursquare, Groupon, and Gowalla, despite all the hubbub (including a rumored $6 billion acquisition offer from Google) surrounding them in recent days.

Hat tip goes to Chris Nuttall, in any event.

Oreo Aims To set Guinness Record For Likes On Facebook