Last week, we asked if you were addicted to social media.  A new report by Edison research suggests that we are all consuming social media, as well as traditional types of media at skyrocketing rates.

Obviously, the proliferation of internet access in the last 5 years has made it easier and easier to consume media.  The study, titled “The Infinite Dial: 2011,” suggests that online media is expanding as a compliment to traditional offline forms as opposed to conflicting with it.

“What’s fascinating about the Internet over the past ten years is the additive effect it has had upon the American media diet, which continues to expand,” said Tom Webster, Vice President of Strategy and Marketing, Edison Research. “Rather than crowding other forms of media off the plate, so to speak, digital media is being consumed simultaneously with offline media, and in venues and opportunities where media might not have been consumed previously.”

All media consumption has increased 20% since last year.  Responders reported 8 hours and 11 minutes per day spent on television, radio, and the internet.  That’s around half of your waking hours.

The survey is huge, and there are many more neat tidbits available on the full presentation slides.

This is a chart showing percentage of Americans 12+ using specific media platforms.  Internet media is gaining on the traditional stalwarts. 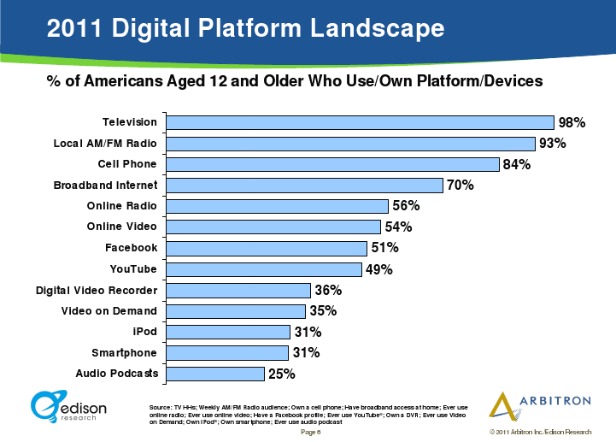 Conclusion:  We take in a lot of information.  Some of it good, some of it bad of course – but there is no doubt that we are experiencing more and more, and it is growing almost exponentially.