Malware reached its highest levels ever in the first six months of 2010, according to a new report from McAfee.

McAfee found 6 million malicious files in the second quarter, compared to 4 million in the first quarter.  Threats on portable storage devices were the most popular malware, followed by fake anti-virus software and social media specific malware. With 55,000 new pieces of malware that appear everyday, globally AutoRun malware and password-stealing Trojans round out the top two malware threats. 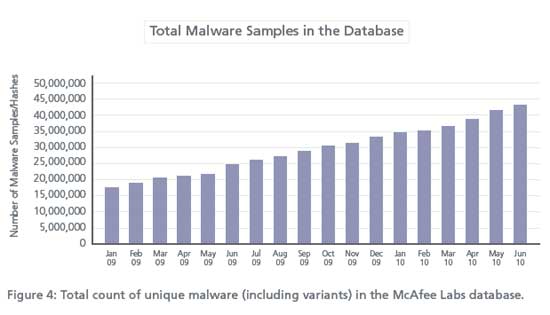 After reaching its highest point in Q3 2009, with nearly 175 billion messages per day spam rates have hit a plateau. Cybercriminals took advantage of anticipation on and hype of the FIFA World Cup in South Africa, and used various methods to promote scams and search-engine "poisoning."

Globally, the most popular types of spam varied from country to country. Delivery status notifications, or non-delivery receipt spam, were the most popular in the United States, Italy, Spain, China, Great Britain, Brazil, Germany and Australia. Malware spam, or anything that comes with a virus or Trojan attachment urging users to visit an infected website, was the most popular in Colombia, India, South Korea, Russia and Vietnam. Argentina had the most variety in spam, with 16 different topic areas, ranging from drugs to lonely women to diplomas. Italy came in with the least variety, with just six types of spam.

"Our latest threat report depicts that malware has been on a steady incline in the first half of 2010," said Mike Gallagher, senior vice president and chief technology officer of Global Threat Intelligence for McAfee.

"It’s also obvious that cybercriminals are becoming more in tune with what the general public is passionate about from a technology perspective and using it to lure unsuspecting victims. These findings indicate that not only should cybercrime education be more widespread, but that security organizations should move from a reactive to a predictive security strategy."