Some major news organizations that make up the Internet Content Syndication Council are reportedly working on some guidelines for content syndication for their own collective membership, while providing an example for others to go by.

The council includes the Associated Press, Reuters, CBS, The Tribune Company, and many others. Here’s the full list of companies represented: 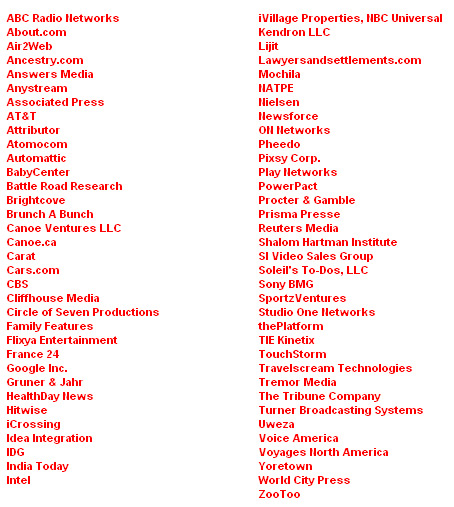 MediaWeek reports: "The guidelines are aimed at countering the effect that the group sees as a growing and dangerous trend on the Web—the rise of shoddy, poorly sourced and edited content, often produced solely with gaming search engines in mind. While not naming these companies directly, the ICSC’s push seems clearly aimed at companies such as Demand Media, Yahoo’s Associated Content and AOL’s Seed.com. Each churns out a large amount of enterprise or general interest service content—mostly produced by low paid freelancers."

According to the publication, the guidelines are aimed at informational content, as opposed to opinion or entertainment content. They reportedly suggest that online articles included a date stamp, clearly labeled corrections, and the authors’ credentials on display.

The Council has been around since 2007. It launched with the goals of improving the understanding of content syndication, increasing awareness of it (in terms of revenue, marketing, and quality), establishing best practices, and providing an objective "third party" point of view on it.

"Content farm" sites as they’re sometimes referred to, are on the rise (though reports indicate Demand Media has experienced a sudden drop in traffic), and it is hard to say if the Council’s efforts will have any bearing on their output. MediaWeek indicates, however, that  the council has been reaching out to them and search engines (including Google) alike.