Reward Alerts allow brands and local businesses to offer limited-time deals to people nearby. Reward Alerts offer a “flash” deal that is redeemable in person, instead of a deal that is purchased now, but used at a later date. 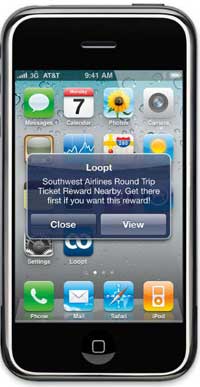 The first Reward Alerts go live in March for upcoming deals featured in the Loopt application. Users  download the update, log in, turn Rewards “on” in the app’s settings, and nearby deals will be sent straight to their iPhone, iPod touch or Android phone.

The  first Reward Alerts will be available in Austin, Texas during the South by Southwest (SXSW) Interactive show (March 11-15). Participating brands include Fox Broadcasting, Microsoft, OkCupid, Southwest Airlines and TiVo, among others.

“With Loopt, we can alert people to what’s going on around them right now, which opens up tremendous opportunities for consumers to learn about a great deal. It’s a win-win for businesses and consumers.”