It looks like some users can access even more deals after Loopt and Groupon teamed up in an effort to help both merchants and consumers. Last week, the companies announced the integration of the daily deals service’s Groupon Now product into Loopt.

The partnership also incorporates Loopt’s recently launched Reward Alerts product that allows users to opt in to get timely deals in their current location. Loopt CEO Sam Altman told WebProNews that he hoped the joint effort would create a great experience for consumers and merchants, while also creating a solid revenue stream for Loopt and Groupon.

“This is something we’ve been excited about for a long time,” he said. “It’s another way that we help connect users to the places around them.”

Altman believes the partnership will specifically help local merchants as they make limited and immediate offers. For example, if a restaurant wanted to increase its lunch business, it could send out an immediate offer for 50 percent off their lunch menu. In this case, the merchant wins because it has the opportunity to monetize something that it probably would not have gotten any value from otherwise. The consumer also wins because he gains value in the good deal. 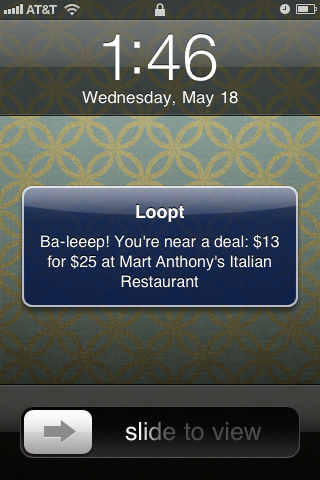 Marshall Kirkpatrick over on ReadWriteWeb suggested that this partnership could be an “aggressive move” on Loopt’s part to beat Facebook with its own deals service. When we asked Altman about this inference, he said his company wasn’t trying “to beat someone to the punch.” Instead, he said, “What we’re focused on here is really doing the right thing for users and for local businesses.”

In terms of competition, Altman could not comment on All Things D’s report regarding Foursquare and Groupon’s potential partnership. However, he indicated that it wouldn’t be surprising for the two to reach an agreement.

He also pointed out that Loopt’s partnership with Groupon is different from other offerings since it can constantly connect users to new locations and deals without its app even being opened.

“We have a particularly strong value proposition there because we have this constant location, and we can alert our users when they’re near these deals,” Altman said.

In addition, he believes that merchants are not as interested in offering deals to users who have already checked in but are more interested in pulling in new people with their deals. According to him, Loopt and Groupon together are helping merchants attract these new consumers.

At this time, the service is only available in the Chicago area, but Altman said Loopt would open it up to more places as Groupon does.

As both consumers and merchants, how important is this partnership to you?