This day will go down in history as the day of Google Buzz. After Google’s press event (which we live-blogged and discussed here) Google put up several posts explaining more about the "buzzworthy" new product.

"Google Buzz is a new way to start conversations about the things you find interesting," says Gmail and Google Buzz Product Manager Todd Jackson. "It’s built right into Gmail, so you don’t have to peck out an entirely new set of friends from scratch — it just works. If you think about it, there’s always been a big social network underlying Gmail. Buzz brings this network to the surface by automatically setting you up to follow the people you email and chat with the most. We focused on building an easy-to-use sharing experience that richly integrates photos, videos and links, and makes it easy to share publicly or privately (so you don’t have to use different tools to share with different audiences). Plus, Buzz integrates tightly with your existing Gmail inbox, so you’re sure to see the stuff that matters most as it happens in real time."

"We’ve relied on other services’ openness in order to build Buzz (you can connect Flickr and Twitter from Buzz in Gmail), and Buzz itself is not designed to be a closed system," he says. "Our goal is to make Buzz a fully open and distributed platform for conversations. We’re building on a suite of open protocols to create a complete read/write developer API, and we invite developers to join us on Google Code to see what is available today and to learn more about how to participate."

We looked at the promo video for Google Buzz in another article, but Google has also now provided one focusing specifically on Buzz’s mobile aspects.

To make sure you don’t miss out on the best part of sharing, Buzz sends responses to your posts straight to your inbox. Unlike static email messages, buzz messages in your inbox are live conversations where comments appear in real time.

You can follow the specific people whose posts you want to see, but Buzz also recommends posts from people you’re not directly following, often ones where your friends are having a lively conversation in the comments. If you’re not interested in a particular recommendation, just click the "Not interested" link and your feedback will help improve the recommendations system. Buzz also weeds out uninteresting posts from the people you follow — collapsing inactive posts and short status messages like "brb." These early versions of ranking and recommendations are just a start; we’re working on improvements that will help you automatically sort through all the social data being produced to find the most relevant conversations that matter to you.

Google Buzz is built right into Gmail and is fully integrated with Picasa Web Albums. Any photos you upload to and share from Buzz are automatically stored in a new unlisted album in your Picasa Web Albums account, so you can view them from either site. It’s easy to upload multiple photos at once from Buzz – just click "Insert: Photo" from a new post, select "upload files," and click "Add photos to post" once they’re fully uploaded. Since photos are meant to be viewed fast and full-screen, clicking a photo in Buzz opens an embedded viewer designed to give you an optimal viewing experience.

Google Reader users can link their accounts with Google Buzz as well. "Just head over to Gmail and you’ll be able to link up your Google Reader account with just a few clicks," says Google’s Mihai Parparita  on the Google Reader Blog. "Then, anything you share in Reader will automatically be posted to Buzz. Comments are even shared between both products, so you can view and participate in the conversation wherever you’d prefer." 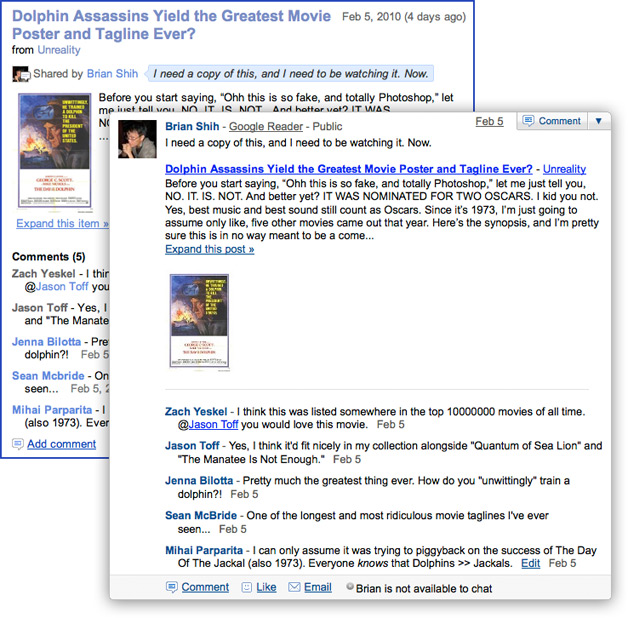 Remember that Google Buzz is rolling out over the next few days, so if you don’t have it yet, you will soon. Google Buzz will become available to businesses and schools using Google Apps, with added features within a few months, according to Google Enterprise Product Management Director Matthew Glotzbach.

Read this article if you want to see what I have to say about search implications and business uses of Google Buzz.

> Whose Got The Buzz: Yahoo or Google?