This week, MerchantCircle shared the results of its "Merchant Confidence Index," in which about 10,000 local merchants shared their confidence levels in the current economy. While confidence has remained generally flat, the index also found that many of these merchants are more prominently using social media as a free online marketing tool to increase their customer base and revenue.

"Our recent survey reflects continued uncertainty among merchants. Economic outlook has decreased to roughly the same level as November 2009, with most business owners continuing to think the worst is yet to come," said Darren Waddell, vice president of marketing for MerchantCircle. "However, we were pleased to see that most aren’t planning for layoffs or pay cuts for employees. Small business owners are continuing to become web savvy in their marketing by increasingly augmenting traditional advertising with free methods like social networking to generate additional business."

Among the findings of the survey were the following numbers for how people are promoting their businesses with various tools. It is interesting to see how little respondents are using some of the services attracting the most attention these days (mainly the ones furthest to the right): 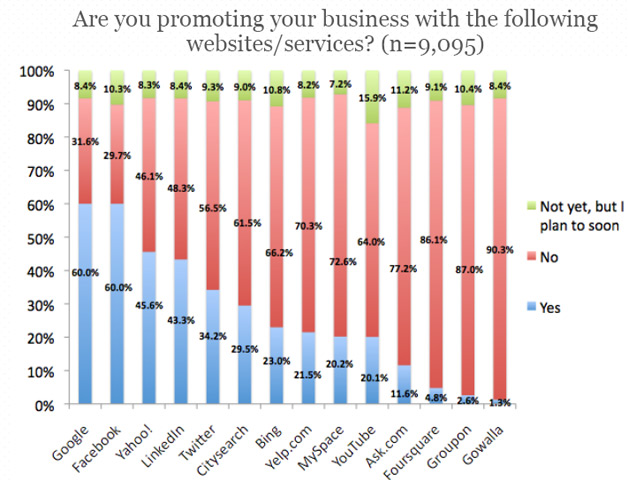 Still, awareness of location-based services is on the rise. For example, MerchantCircle says today, 16% of merchants are familiar with Foursquare, whereas in Q1 of 2010, the number was only 8%. Likewise, 32% of merchants that are aware of Foursquare are using it to promote their business, compared to 25% in Q1.

It is worth noting that this is the first time social networking has eclipsed all other marketing channels to become the most popular among survey participants since MerchantCircle has been doing the survey.