A new tool in its very early stages of development allows you a window into the demographics of Facebook. More specifically, what attributes characterize the fans of certain pages. LikeAudience lets you find out things like the intelligence level of Inception fans, the typical relationship status of Kim Kardashian fans or just how extroverted Lady Gaga’s fans are (spoiler alert: quite.).

LikeAudience is being developed by David Stillwell of Nottingham University and Michal Kosinski of Cambridge University, with the support of the Cambridge University Psychometrics Center. The data is pulled together through the Facebook applications myPersonality and myIQ. Apparently, thousands of people use these applications daily, and their data and likes are collected (with consent, mind you) to be used in LikeAudience.

On the website, they stress privacy, saying all info looks as such when they get their hands on it:

One problem if you are trying to use the tool right now is the small sample size. As of today, it only includes about 50,000 people and 6 million individual likes. Good news however, they will be adding 50,000 people in the sample database monthly.

Here is how you can use LikeAudience:

You can search for any subject, and if it has a Facebook page it will probably show up. I searched for “Radiohead.” I am then given a chart of certain attributes, seen below. To nobody’s surprise, Radiohead fans are predominately male introverts between the ages of 23-29. They also have fewer Facebook friends than average and are mostly single. 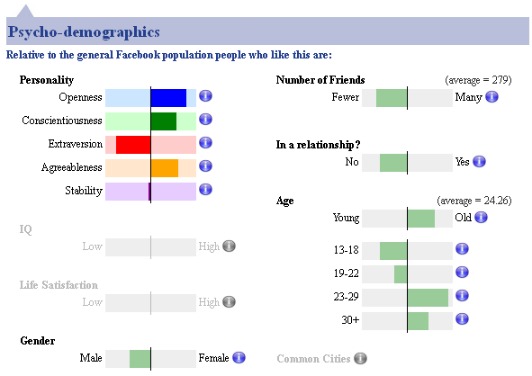 As you can see above, one problem with the current small sample size means that not enough data exists to calculate intelligence and life satisfaction.

You can also work LikeAudience in reverse, selecting varying levels of certain traits and finding out which pages that type of person likes. My search for less intelligent, outgoing females told me they like Khloe Kardashian, The Hills and Willow Smith. 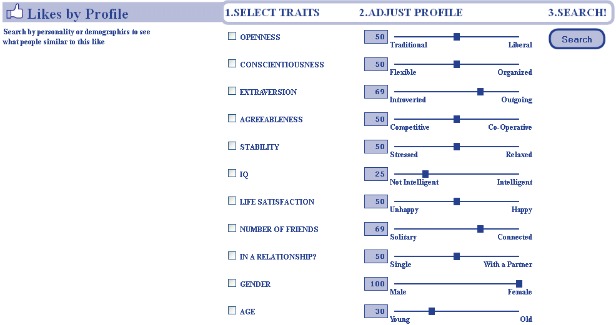 This is all good fun, as it’s great to see the demographics of people who like the things you like. But as this tool expands to include more and more data, it could become very useful to marketers who are trying to get to know their target audience. For instance, Wendy’s could look and see that their average customer is an outgoing single male, about 23 years old. On the other hand, Taco Bell’s average fan is only 21 years old and is less predominately male than Wendy’s. So, while interesting on its own, this could become a great tool for targeted advertising.