Lakers Win Over Celtics Gets Twitter Record Tweets Per Second

Twitter announced today that it achieved a record 3,085 tweets per second last night as the Los Angeles Lakers beat the Boston Celtics in the NBA Championship. 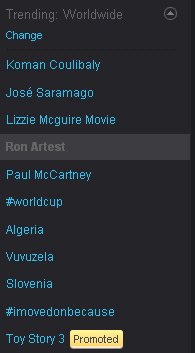 For comparison, Twitter sees an average of about 750 tweets per second in a given day, and 65 million total tweets in a day. One has to wonder how much the Fail Whale has held these numbers back though.

Speaking of Fail Whales, Twitter has changed the message on the Fail Whale page slightly to link to the Twitter Status blog. The company apparently got the idea from a blog comment on TechCrunch. If you’ve been questioning the importance of blog comments, that’s something to think about.

Twitter also highlighted these goals from the World Cup as the most tweeted goals of the past week:

As for the Lakers, Twitterers weren’t the only ones excited about the outcome of that game.