Samsung has unveiled its Galaxy Tab tablet device, and Kobo announced that it is supplying the e-reader technology for it.

"After much speculation, the new Samsung GALAXY Tab has just been announced by Samsung’s CEO in Berlin, and Kobo is THE eReading application powering the ‘Readers Hub’ on the new Android tablet," says Kobo. "This partnership is an industry first for Kobo and Samsung, offering the first eReading experience on an Android Tablet to readers worldwide."

"This is a HUGE WIN for Kobo!" the company proclaims. "Samsung is a global leader – a world class organization that touches billions of consumers worldwide.  The GALAXY Tab is an amazing device and will be a real contender in the marketplace as consumers everywhere adopt tablets. To have been selected as THE eReading application that powers the ‘Readers Hub’ on this device is simply incredible." 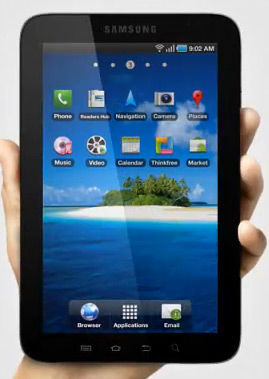 The announcement comes at a time when not only is the competition heating up in the tablet space, but it’s also heating up in the e-reading space, led by Amazon’s Kindle, which offers apps on other platforms as well as its own. This is going to be another space (in addition to the connected-TV space) to keep a close eye on over the next year or so.

Kobo’s store has over 2.2 million popular titles, including new releases and 1.8 million free books. The company also says its adding thousands more each week. Apple announced yesterday that it has 35 million books in iTunes.