Kris Humphries scored some cool cash today after selling his ex-wife’s engagement ring. Humphries is a pro ball player for the NBA but is probably better known for his marriage to reality TV star and fashionista, Kim Kardashian.

The enormous engagement ring designed by Lorraine Schwartz, sold for $620,000 on Tuesday at Christie’s auction house in New York City. The buyer will, however, need to cough up a total of $749,000 after Christie’s mark up is included. Though Christie’s did not name the seller, Lee Hutton, Humphries’ lawyer, confirmed that Humphries was in fact, the “the gentleman” doing the selling.

Kim Kardashian’s ring was valued by Christie’s to be between $300,000 to $500,000, but Hutton insists that Humphries is not losing money. Really? A few years prior to the ring’s sale at auction, Humphries presented the ring to Kardashian when he proposed on one knee on her reality show. At that time the ring was estimated to be valued at $2 million.

“It was something that was a part of the divorce, the dissolution agreement,” said Hutton to the Daily News. “Kris is pleased with the outcome of the sale and the fact he can give a portion of the proceeds to a deserving charity. He’s in the process of selecting the charity now.”

Humphries and Kardashian tied the knot in August 2011, in a nationally televised TV special, but the union was short lived – it lasted just 72 days.

Humphries, now 28, said he was blindsided by Kardashian, 32.  She filed for divorce on October 31st, stating that her decision was made with “careful consideration.” Humphries later sought an annulment claiming that the marriage was a fraud and a publicity stunt for Kardashian’s reality show. 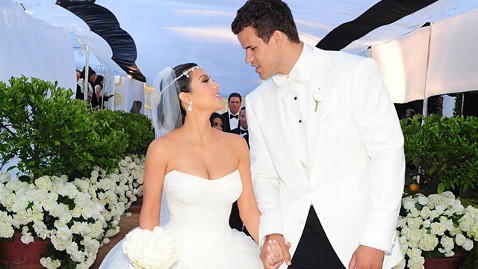 Kim Kardashian and Kris Humphries were officially divorced on June 3rd of this year. Two weeks later, she gave birth to her first child, North, with rapper Kanye West.