Kickstarter defines themselves as “the largest funding platform for creative projects in the world.”  Today, the site turns two and is releasing some stats on their success.

The rules for Kickstarter are simple.  Projects are be submitted through the service for funding.  The funding is raised by ordinary people, all across the world.  Say you want to make open source software for nuclear radiation detection?  Or you want to make a short independent film on monarch butterflies?  Or lets say you want to open a small restaurant selling only bacon flavored pastries?  Kickstarter is for you.  Really, the possibilities are massive, bordering on limitless.

When you donate to a creative project on Kickstarter, you aren’t buying a piece of the project and don’t expect to be paid back.  You are simply helping to fund someone’s dream, and with thousands of people donating to the same project, little donations can fund an entire project.  It is truly a great concept.

Kickstarter reports that $7 million was pledged to projects in March.  That is up from $5 million in February and a little over $1 million last March.  Over 2,100 unique projects launched in March, and they project April will turn out to be much bigger. 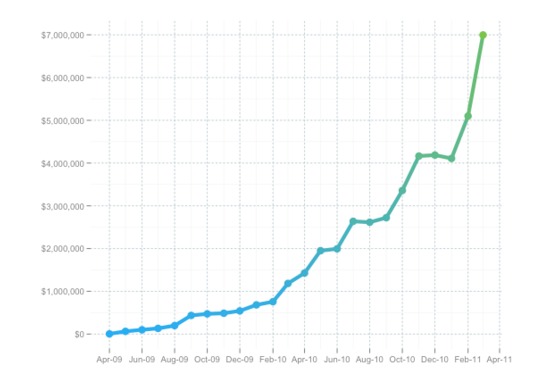 In the two years, Kickstarter has seen just over $53 million pledged.  $40 million of that has been collected, meaning the project was successful.  That’s right, Kickstarter works on an all-or-nothing basis.  If you don’t reach your total goal in the allotted amount of time then you don’t receive any of the pledged funding.

That being said, $7 million of that $53 has been uncollected due to unsuccessful projects and $6 million is tied up in current projects.  This gives Kickstarter a collection rate of 85%.

In the two years just over 20,000 projects have been launched, with 7,500 of them finding full funding success.  This success rate of 43% might not seem too great, but remember – all of Kickstarter’s projects are funded by the online community.  Regular people.  And going by the current projects just on the home page of Kickstarter’s website you will see that the project goals range from about $3,000 to $15,000.  Kickstarter thinks 43% success is great, as they had projected a 5% rate before the service went live. 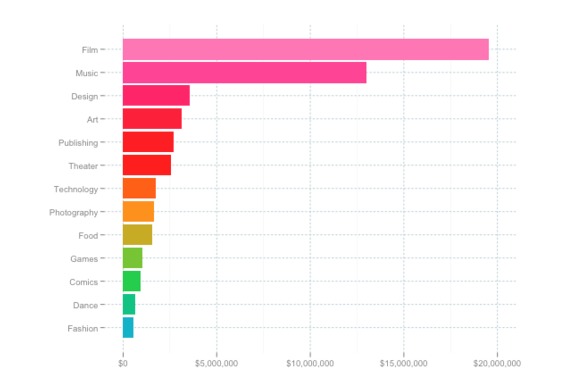 If I seem overly excited, it’s because I am.  I have personally seen local bands and indie filmmakers find success for projects through Kickstarter that they never dreamed they could begin.  It proves that there are a bunch of people out there who truly care about funding creativity.