Kenneth Cole was trying to be cute, not insensitive; at least, according to Kenneth Cole.  Nevertheless, his ill-advised marketing Tweet referencing Egypt, trying to bring humor to a decidedly-unfunny situation was given the treatment it so deserved.

By now, the news of Cole’s daft Tweet has been covered hither and yon, but in case you missed it, fashion designer Kenneth Cole made the following comment about his upcoming shoe line:

“Millions are in uproar in #Cairo. Rumor is they heard that our new spring collection is now available online at http://bit.ly/KCairo”

For his efforts, Cole was rightfully shamed on Facebook and Twitter alike.  So much so, in fact, much like the Food Network and Dark Chocolate as a Snack, the offending item has been removed.  In its place is an “I’m sorry I got caught” type of apology.  The type that never would’ve been made if the uproar hadn’t come down.

“Re Egypt tweet: we weren’t intending to make light of a serious situation. We understand the sensitivity of this historic moment -KC”

Tail-between-the-legs responses aside, the brilliance Cole displayed in his Tweet that started this mess was not easily forgotten, something Boing Boing (via Coilhouse) points out rather well with the following image: 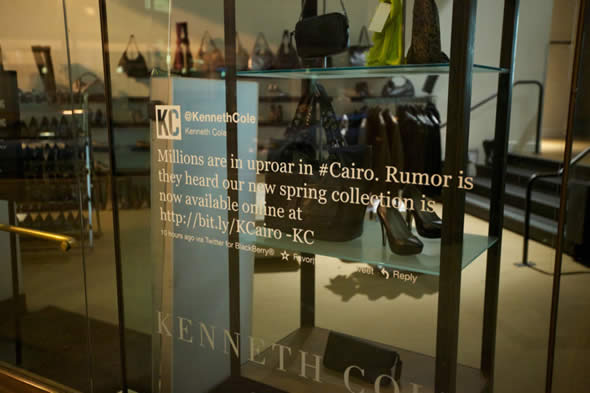 That, friends, is exactly what it looks like:  Some creative street artist transformed Cole’s Tweet into window cling, and stuck it to one of his stores in San Francisco, to which I say, “brilliant!”  Granted, the offending cling was undoubtedly removed as soon as it was discovered, but thanks to viral nature of the Internet, it’s never that easy.

Once a photo hits the tubes, there’s not much you can do to stop it from making its way around.  Just ask anyone who’s had unwanted nude images show up in a Google Image Results page.

Earlier today we discussed the Food Network experiencing an audience’s wrath, in the form of user-generated content.  I think Kenneth Cole now knows what that particular sting feels like as well.  While the medium may be different, the desired result — mockery, exposure, shame — is definitely not.

The Food Network Learns About The Power of User-Generated Content