PeopleBrowsr shared a rather interesting report with us this week, looking at privacy related tweets during the center of this year’s Facebook "privacy storm." The firm studied the public’s reaction to Facebook’s open graph-related announcements that set off the majority of the Facebook privacy controversy back in April.

"We are the last generation to know privacy as it was," says Brian Solis, Chief Data Analyst for PeopleBrowsr. "As Facebook moves human connections and society into a more public spotlight, people and the press will push back. But this will move things forward collaboratively. Over time I believe the debate will evolve into a series of productive forums and memes that explore the risks of living in public and the rewards for participation." 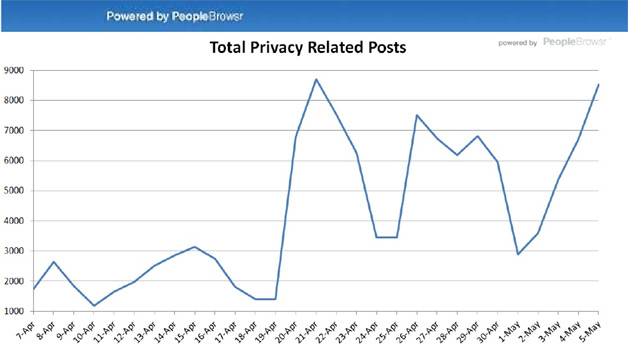 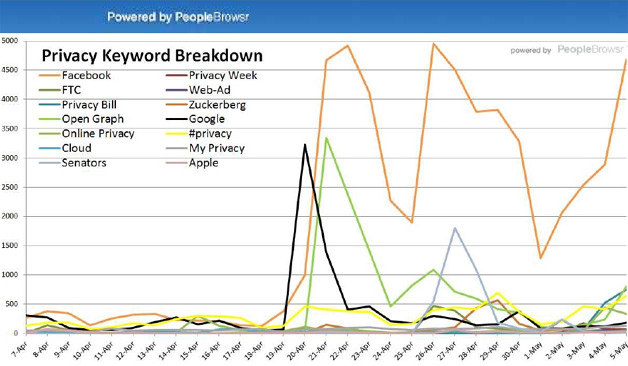 Some of PeopleBrowsr’s findings from the study:

– On April 25 (day after the conference), privacy-related tweets fell to 3,500 – then surged to 7,500 when politicians joined the fray. Around May 25, privacy discussions hit the ceiling in this study with 20,000 unique discussions.

"We see that even on the day when privacy took center stage, the media sensationalized the topic. But the public, at least those on Twitter, did not flood the streets with 140 character picket signs. 9,000 tweets does not seem to account for the millions of Twitter users or the 500 million people who have Facebook accounts," says Solis.

That last statement is true on a couple of different levels. For Solis’ purpose it does not appear to indicate that the majority of Facebook users were that concerned. However, it is also worth noting that the majority of Facebook users are not necessarily active Twitter users. Facebook has over 500 million people. It’s not a flawless argument, and the findings should be taken with a grain of salt like any such study. That said, Twitter is generally viewed as a good indication of public opinion, as trending topics often reflect pop culture and news at large. If there is something significant happening, you can generally find people talking about it on Twitter.

Besides, Facebook’s numbers continued to grow. Diaspora (the "Facebook alternative") will be here soon. I’m willing to bet that will have little impact on Facebook’s growth as well.