Harry Potter-mania has to be the the most long-lived hysteria that I’ve ever lived through. Since the publication of the first book, through the movies, and up till now, fans of the series remain thrilled with any new development in the world of Hogwarts. Take for instance the bestseller status of a tiny collection of companion material know as “The Tales of Beedle the Bard” or the opening of the Wizarding World of Harry Potter Theme Park. Yeah, the boy wizard is still pretty popular.

Potter fans may now have something else to focus their internet attention towards, other than making Twitter trending topics out of Ron Weasley and Luna Lovegood. A mysterious site has popped up called Pottermore and the only thing on it is “coming soon” and JK Rowling’s signature.

The site was unveiled by a Harry Potter scavenger hunt, where map coordinates were placed on various fan websites like The Leaky Cauldron. Nine were placed on these sites and the final one was tweeted out yesterday on the newly established Pottermore Twitter account.

@pottermore
pottermoreThat tenth secretstreetview.com location you were looking for… here it is! 53.476311,-2.22971 #pottermore

21 hours ago via web · powered by @socialditto

The coordinates, once entered into the search box at secretstreetview.com, would reveal a photoshopped letter on some Harry Potter-themed site. The “M” in “PotterMore,” for example, was a reference to Manchester Station where JK Rowling first conceived the idea to write the beloved novels. 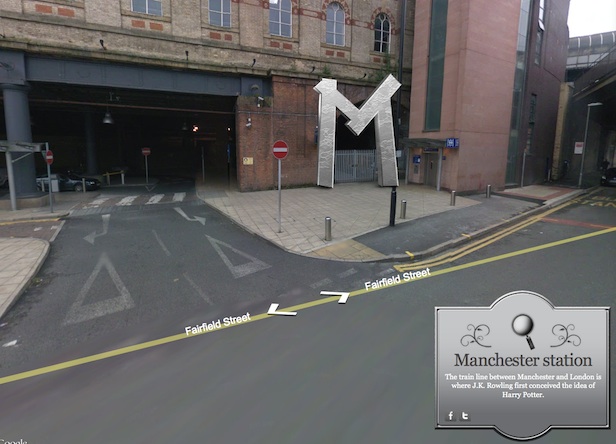 If you click on one of the owls on the Pottermore website, you will be directed to a YouTube page called “JK Rowling Announces.” It doesn’t say what, only contains a countdown clock that now reads about 6 days, 10 hours until her announcement. The poster profile says that fans will be able to watch her announcement exclusively on the YouTube channel. 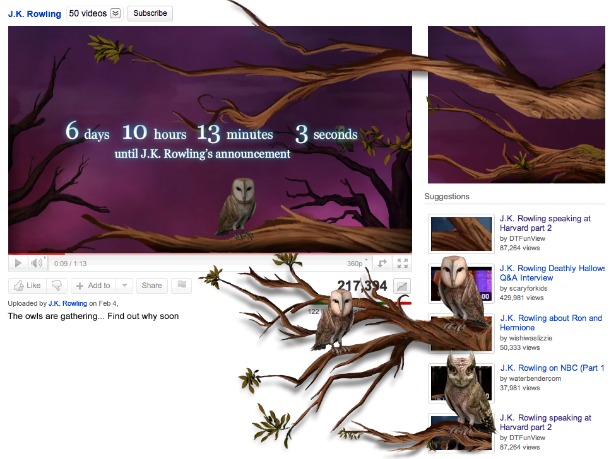 So what in the mudblood could this site be? Rowling’s lawyers have said that it is not a new Harry Potter book. The Leaky Cauldron has this to say –

Speculation on the trademark information of Pottermore has also been making its way around the internet. The info, which was registered in 2009, says that Pottermore is trademarked for, among other things, multiple-user networks, online boards, digital audio, printed books, toys, retail stores, and more, and more, and more – in short, pretty much everything. We don’t feel this gives much direction one way or the other.

Right, that points simply to a giant fan site, possibly a Harry Potter themed social network? If Call of Duty can try it, so can Harry.

Gizmodo says that an anonymous tip told them something about a Harry Potter branded smartphone. Now wouldn’t that be interesting?

What do you think the new site will be? Something magical I’m sure. Are you excited about all new things Harry Potter? Don’t forget, this comes out very, very soon guys…

The Internet is My Religion, One Man's Speech on the Power of Connection