Amazon shareholders who were already on edge over the company’s disappointing earnings report and forecast now have one more thing to fret about.  A new SEC document indicates that Amazon CEO Jeff Bezos cut his stake in the company by a significant amount at the end of last year.

Of course, in fairness to the CEO and his company, Bezos still owns a whole lot of Amazon stock, and it’s his business if he wants to build another house or purchase a selection of exotic cars.  Many people in his position would have already sold everything, bought an island, and retired. 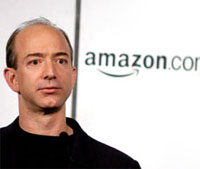 Also, as reported by Reuters, Bank of America Merrill Lynch said in a note, "Owning the stock here requires trust and patience.  We have seen Amazon go through investment cycles before and believe investment in growth is the right long-term strategy for the Internet."

The timing of this announcement is just less than opportune.  Amazon’s stock plummeted in after-hours trading yesterday evening, heading from $184.45 to $164.65, and although things are looking a little better this morning, it’s still down 8.09 percent (at $169.53).

New Google Acquisition Could Be A Key To Company's Social Battle

Mobile Market Up In Q4 Driven By Smartphones