In their latest Cross Platform Report, they found that simply isn’t the case anymore.

A subset of consumers from television and Internet homes has now emerged that defies that notion, with the lightest traditional television users streaming significantly more Internet video, and the heaviest streamers under-indexing for traditional TV viewership.

This behavior is led by those ages 18-34. The group of consumers exhibiting this behavior is significant but small. More than a third of the TV/Internet population is not streaming, whereas less than 1% are not watching TV.

This means that nowadays, if you are heavy into streaming, you most likely aren’t turning on the cable. Here’s a visual demonstration of this: 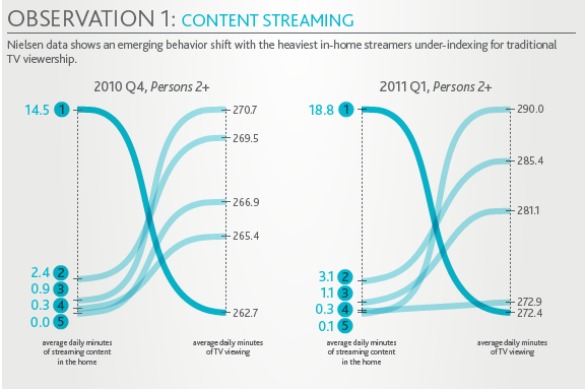 And the next graph shows that the tendency is more pronounced in people aged 18-34. Makes sense, since that is the generation that has grown up on Netflix and YouTube. 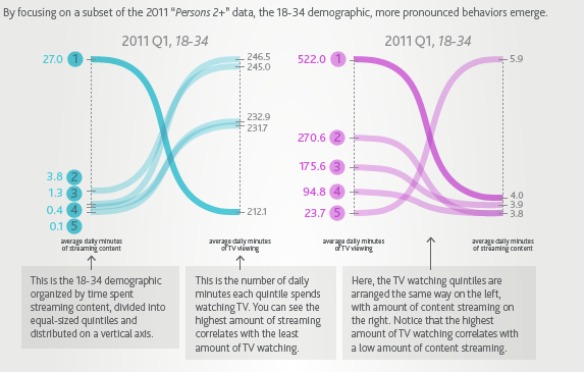 This is interesting news, and unsettling news I’m sure for TV executives and cable providers. Among a set of people (the heavy online video connoisseurs), albeit a small set, they are satisfying themselves almost exclusively with streaming video. Is it only a matter of time until it is not just the heavy internet users who are watching traditional TV less and less?

As of right now, however, it looks like Americans simply love any type of video you put in their faces. According to Nielsen, overall TV watching increased 22 minutes per person per month year-over-year. Nine out of ten households with TVs have cable service. DVR usage continues to grow and even mobile video has increased 41% year-over-year.

Will internet video ever completely knock the crown off Television? Let us know what you think.