Do You Go to MySpace for Friends or Content?

What is MySpace at this point? According to News Corp, which owns it, it’s a content site. PaidContent quotes News Corp. COO Chase Carey: "In terms of the strategy, it’s not about going toe-to-toe with Facebook. MySpace is a content site. It’s not where we need it to be, but it’s headed in the right direction."

If you actually go to MySpace.com, there is not a whole lot of immediate focus on content (update: after some refreshing of the page, some video links did appear on the home page, but none at first). For example, if you click "take a tour" under "New to MySpace?" at the top of the page, you are greeted with something that looks like this: 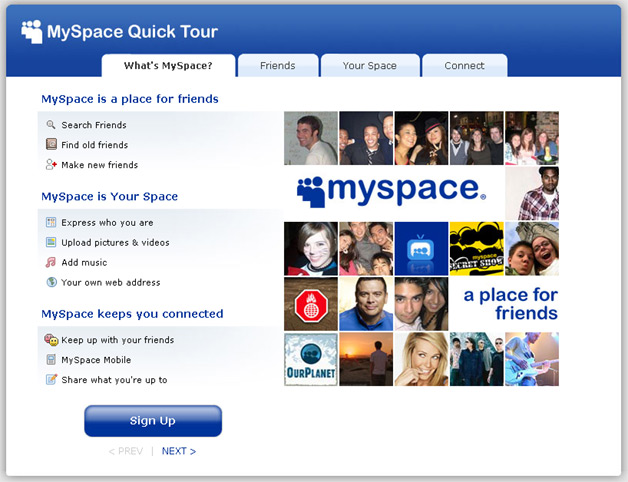 MySpace is a place for friends. Search friends. Find old friends. Make new friends. Express who you are. Keep up with your friends. Share what you’re up to.

Not exactly pitching the content angle to new users.

If you log-in to MySpace, you are greeted with a box to update your status, and your stream, showing your friends’ updates, as well as various profile editing links and alerts related to your account, etc. There is very little focus on content, outside of the navigation bar links.

MySpace does have content if you look hard enough, but if that is how News Corp wants the site to be viewed, they do have some work to do. If it’s not about "going toe-to-toe with Facebook," they may want to consider some changes to how their content is presented.

MySpace still has a lot of users, it may be easy to lose track of that, given the narrative often painted around MySpace in the media. Compete shows it getting about twice as many unique monthly visitors as Twitter.

Granted, there has definitely been a decline, and Twitter.com visits are certainly not entirely representative of Twitter use. Third party apps play a significant role. MySpace has mobile apps too though. The comparison between MySpace and Twitter are beside the point anyway. The services serve different purposes.

The point is that MySpace still has life left in it, but it may take some serious adjustments of the site itself to make people realize that. Ray Padgett at Mashable notes that MySpace can still win as a Music destination, though it doesn’t help when you have the managers of two of the biggest current music stars’ managers (Lady Gaga and Justin Bieber) talking about how nobody uses MySpace anymore, and that they focus on YouTube and Twitter.I wonder if they know MySpace has both artists listed among their top searches.

Carey says MySpace will have a lot of product launches in the coming months. It will be interesting to see how MySpace positions itself as a content site.

Do you think MySpace is better off as a content site or as a place for friends? Share your thoughts.

May 27, 2010
Latest Posts
Registration is disabled.