Is MasterCard Declaring War on PayPal?

This week MasterCard announced a new developer initiative, which will place MasterCard payment technology in mobile and online apps.

"We are excited about tapping into the ingenuity of software developers around the globe to help create the next generation of game-changing payment applications," said Josh Peirez, Chief Innovation Officer, MasterCard Worldwide. "We feel this will unleash innovation within our industry especially in the burgeoning areas of e-commerce and mobile payments."

PayPal was quick to remind people that that it specializes in this concept, saying Mastercard is "following in its footsteps."

"We’ve been working with developers for more than a year to deliver PayPal X, the first open global payments platform with functionalities specifically based on developer needs," says Damon Hougland, senior director of PayPal X, the company’s open platform.  "Since we opened up PayPal X, thousands of developers have signed up, hundreds of apps have been built, and millions of dollars have transacted over our platform." 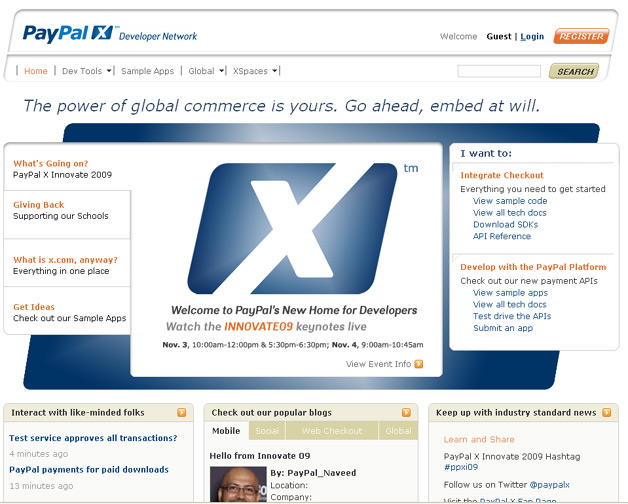 "We’re already helping developers make money and monetize their visions," he continues. "Split Payments, for example, allows developers to automatically add their service fee to any PayPal transaction. Developers using PayPal X are already changing the way consumers think about money – for example, we worked with the folks at Bump, a technology to swap information between smartphones by tapping them together, to incorporate this functionality into the PayPal Mobile for iPhone app. Now people can just ‘bump’ iPhones to transfer money. In the first three weeks alone, the application was downloaded more than one million times."

PayPal says next month it will offer developers the ability to collect credit card payments from within their PayPal X-based applications. This means they wouldn’t have to deal with complications commonly associated with credit card acceptance. The company says to expect "a lot more innovation" in the run up to its developer conference in October.

MasterCard says its Open APIs will be available around the world later this year. Depending on whether or not development on top of the APIs gets heavily under way before October, PayPal’s conference should be all the more interesting, adding to an already increasingly fascinating year of application payment options.

Last week at Google I/O, PayPal announced the availability of its Mobile Payments Library for Android, as well as the launch of its PayPal X Toolkit for Google App Engine. These should both increase reach significantly.

Microsoft Exec On Cloud Computing: "We're All In"