Google often takes a lot of flack for not being incredibly successful with its social media efforts. Most recently, Caroline McCarthy and Tom Krazit tackled this subject in a CNET article claiming that "Google struggles with social skills." I would not go so far as to say that I completely disagree with them. They make plenty of factual points that are simply undeniable. Orkut hasn’t set the world afire. Jaiku and Dodgeball didn’t work out. YouTube was pretty much established by the time Google bought it, and even since it has not been the financial success many would have assumes it would be, despite its enormous popularity.

Is it that Google doesn’t do well with social media or is it that Google is doing better at it than most people even consider. First, you have to ask yourself: what is a social network anyway? What is social media? Is it Facebook? MySpace? Twitter? Is it a network of connected people? Google Profile users can look at their "social circles" and quickly realize that Google has them connected to people.

If you look at the definitions for social media, you get things like "content created by people using highly accessible and scalable publishing technologies," "a category of sites that is based on user participation and user-generated content." I think Google has done pretty well at indexing and monetizing user-generated content (that is if user means user of Google, which essentially makes the majority of all content user-generated).

When you compare Google to Facebook, wouldn’t it be fairer to break down Google by its various offerings? Wouldn’t it be fairer to compare Google itself to Facebook? You can say, well, Google Friend Connect isn’t as successful as Facebook. Jaiku wasn’t as successful as Facebook. Wouldn’t it make more sense to chalk each of these offerings within Google as features of the broader Google network, for all intents and pruposes?

Most of Google’s products require one account. You log in to your Google account and there are a lot of different things you are able to do, and it’s all because of that one account. You can email people, chat, write documents and spreadsheets, use webmaster tools, etc., etc., etc. Is Google not just a social network with a lot more features than most others (not to mention what many would consider to be a better search tool than most other social networks)? 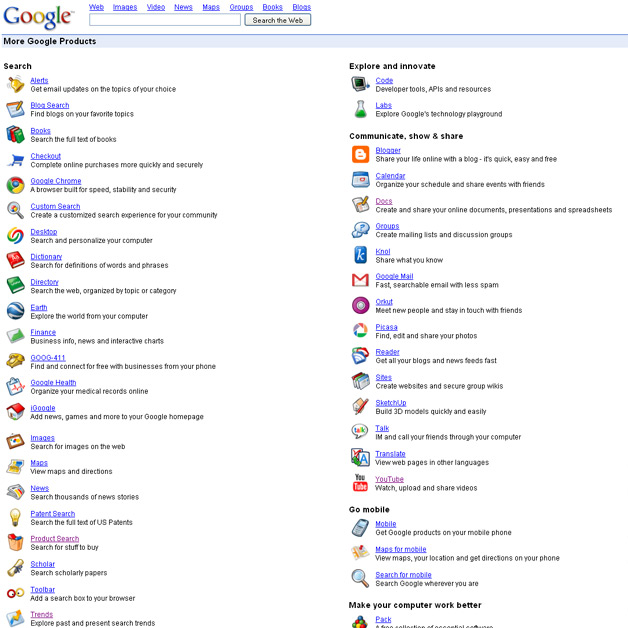 Is Google’s "failure" at social media due to not having a proper Twitter-like stream (which Facebook essentially took and ran with by the way)? Maybe Google doesn’t have the best feature in every social media category, but I think they’ve pretty much taken the cake in some categories, and last I checked, Google is pretty successful.

I write this not as some kind of Google fanboy, but each day, I see Google launching new products and features, finding new things for users to do, and particularly for those who have a Google account. A lot of what you can do with various Google products requires you to be logged in. A lot of it is very social (profiles, social search, real-time search, document sharing, Google reader sharing and commenting, emailing, chatting, Google latitude…just to name a few). Maybe we should consider the sum of all users across all of the company’s products to determine just how successful it is at this so-called “social media”. Google makes money. Crazy money.  I wonder how many people have Google accounts.

Note: For the record, I understand that nobody’s saying Google itself isn’t succesful.

Is Google really not good at social media? I’ll ask again, what is social media really? We tend to put these labels on things, but I don’t think it’s so black and white.

> Integration – The Key to Google as a Social Network