Many are getting a substantial amount of their news today from Twitter, but Twitter appears to have higher aspirations for becoming an important news service. Note: this article has been updated following recent developments.

Co-founder Biz Stone told Reuters this week, "From the very beginning this has seemed almost as if it’s a news wire coming from everywhere around the world….I think a Twitter News Service would be something that would be very open and shared with many different news organizations around the world."

According to Reuters, Stone says he’s "eager" to utilize Tweets to help create a news network.

Update: Since the Reuters story ran, there have been some conflicting reports about Twitter’s actual plans. In fact, tweets from Twitter communications guy Sean Garrett indicate that Stone was just being imaginative, and that there are no real plans for a Twitter news service (via TechCrunch).

@ojchiang: @biz pondered how news orgs could do this on their own (or together). Perhaps w/ direct access to Twitter data. all hypothetical.Wed Nov 24 19:10:50 via web

But even Stone said right in the Reuters interview that the service wouldn’t be run by Twitter anyway. It would be partnerships with news organizations. The way he describes it in the video clip below, makes it sound similar to how other entities are already utilizing Twitter APIs:

The exact quote from Stone as seen above is: "A Twitter news network would not necessarily be run by Twitter, but would be in partnership with several news networks with all of them getting access to our data and doing different things with it…specializing in different ways. One news network may only want news out of Japan. Another may only want what links are people passing around today…"

This is actually not the first time Stone has expressed such sentiments. He wrote on the Twitter Blog nearly two and a half years ago, following an earthquake near LA, "Many news agencies get their feed from a news wire service such as the Associated Press. ‘Strong quake shakes Southern California’ was pushed out by AP about 9 minutes after people began Twittering primary accounts from their homes, businesses, doctor’s appointments, or wherever they were when the quake struck. Whether it’s updates from best friends, internet pals, companies, brands, or breaking world events, the real-time aspect of sending and receiving Twitter updates continues to motivate our work." 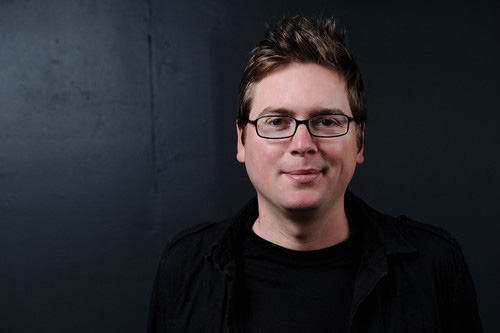 Twitter is Already a Big Part of News Reporting

Twitter has obviously come a long way in two and a half years, and news organizations have of course latched on. A recent Fast Company article by Ellen McGirt says:

There’s also the possibility, of course, that Twitter is becoming the CNN for the 21st century. Sladden [Chloe of Twitter’s Media Team] walks me through the Twitter activity around the attempted coup in Ecuador in late September. Following the sequence of bystanders uploading photos, she shows me people milling nervously, then police in riot gear, then smoke. "You can feel the growing tension and violence," she says. "I can see the Ecuador coup unfolding before my eyes in real time, with just a basic Twitter search."

This is just one of the ways Twitter can use its more than 160 million users worldwide to do news gathering. "Twitter is a democratic medium," Williams [Twitter co-founder Evan] says. "We can democratize information." And Twitter can package that content through its new interface to deliver not just real-time updates but also commentary, photos, and, yes, even video.

There are plenty of ways news organizations can tap into Twitter. Tthere’s no question the content is out there. It is already fueling and complementing news reporting to a great extent. What Stone seems to be describing would simply formalize and organize it. The interesting thing would be to see how news organizations could improve on what’s already there. I’m guessing this wouldn’t be much more than glorified versions of Twitter’s exiting "lists"  – a form of authoritative content curation and syndication.

All we can do is speculate at this point, but  if news organizations could tap into an AP-like Twitter newswire, it could make Twitter even more of a mainstream news source for non-users.

The Good, the Bad, and the Reality of Twitter as a News Source

The reality is that news often breaks on Twitter before it breaks by a traditional publication or even a blog or news website. See Stone’s earthquake example. Twitter is immediate, and it’s right from the source, whether that be a person in power making an announcement or an eyewitness report from a citizen.

Another advantage Twitter offers is the ability to reduce spin. Granted, any single Twitter user has their own biases, just like any single reporter, but if it’s coming directly from the source, the content is at its root – it’s purest possible form, before it makes its way into the newsroom to be curated or elaborated upon by a third party. There’s something to that.

Of course, on the flipside of that you get a lot of noise and a lot of credibility questions, and that’s where that curation comes in. It’s up to the news consumer to establish sources they trust, and Twitter can actually be good for that too, thanks to search – the crowd. Different perspectives from different users.

However, there is a difference between a tweet from some random person and one from a well-known figure, in terms of credibility. For example, if John Doe tweets that Google is buying Yahoo, that’s going to require a higher level of scrutiny for accuracy than if Google CEO Eric Schmidt tweets the same thing.

It’s interesting to see how Twitter is affecting not only the news, but journalists themselves. An article at the Daily Beast looks at the phenomenon of journalists bashing each other via Twitter in order to promote themselves as the more authoritative sources (although this isn’t much different than what some are doing on TV or radio). If this kind of behavior continues to run rampant, as it no doubt will, users may find that they’re better off skipping the middlemen and going straight to the sources anyway – many of which will be tweeting actual news while the "reporters" are busy bickering. Twitter caters to that much better than TV or radio.

Hopefully any use of a Twitter-based newswire-type feed will be able to effectively filter through this kind of thing too.

Related:
How Bloggers Can Find Journalistic Credibility
Can Twitter Make Google News Better?
How the Crowd is Changing the News (SXSW)