iPhone Users Found To Be Most Loyal

Whether it’s been accomplished by the hardware, the software, or the marketing department, Apple has done something right when it comes to creating user loyalty.  New data from Zokem indicates that iOS users are more loyal than the users of other mobile operating systems by a wide margin.

Zokem surveyed over 1,500 smartphones users and found that, on a loyalty scale ranging from negative 100 to 100 percent, the iPhone scored an impressive 73 percent.  That puts it far ahead of the competition, as the chart below shows. 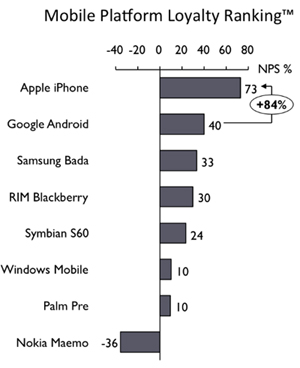 Indeed, Zokem even explained in its report, "Generically NPS score higher than 60 % is considered good.  The only smartphone platform that exceeds that is iPhone . . ."

That means iPhone owners are extremely likely to buy another iPhone when it comes time to replace their current model.  Meanwhile, other people may choose to experiment, winding up with a device associated with Apple, Google, or RIM.

Still, second place doesn’t look to be such a bad thing for Google.  Hannu Verkasalo, the CEO of Zokem, said, "Android is a good number two in the US market, even though the loyalty score is not nearly as high as it is for iPhones, but it seems that people who are using Android are also very likely to buy an Android-based device as their next smartphone too."