It only makes good business sense for a company to pay close attention to returns being made on a new product, to ensure there are no major defects. Apple has taken their monitoring of the iPad 2 to the next level.

An individual may return the wildly popular iPad 2 tablet for many reasons. The backlight may bleed, it may have dead pixels, the Wi-Fi could be wishy-washy, you just might have gotten one cheaper off of a street scalper…or after an impulse buy your spouse might make you return it. 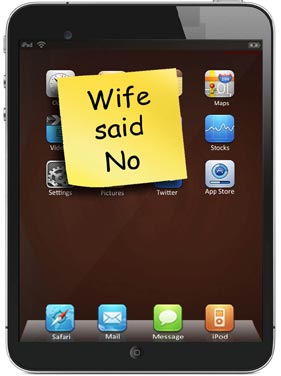 MacRumors recently reported that Apple took notice when a man returned his iPad 2 with a note attached that read, “Wife said no.” An undisclosed source that is “close to Apple” said that the note caught on and climbed its way up the corporate ladder to two Apple execs who made the decision to send the man a free iPad 2. The quote from this undisclosed source reads:

“[Apple’s] focus this week has been to troubleshoot all the iPad 2s that customers are returning to the stores. One iPad came back with a post it note on it that said “Wife said no.” It was escalated as something funny, and two of the VPs got wind of it. They sent the guy an iPad 2 with a note on it that said “Apple said yes.”

If this story is true, and Apple actually said, “Yes,” Apple has some pretty amazing customer service taking place, and one very happy customers to boot. And I’d bet that any customer’s wife would be A-OK with him receiving a free iPad.

Don’t get your hopes up too high with the idea of receiving a free iPad 2 after returning your iPad with a clever note attached. Sure, the Cupertino giant wants to satisfy customers, especially after iPad 2 returns claim bleeding backlights and yellow splotches on the screen, but the validity of MacRumors’ aid ‘source’ is questionable at best.

Apple has yet to confirm the validity of the story. True or not, this makes for a very cute and humorous customer service story.

Did you have to obtain spousal approval before buying your iPad?