The newest update to iOS, version 4.3.3 is here – earlier than projected. Rumors about the update releasing within a couple weeks hit on Monday. To the delight of those antsy to get back to thinking that they are off the grid, it’s already available and delivers on the rumored fixes.

First up, the update reduces the size of the cache on your devices. The problem for many regarding the location tracking issue was not the fact that Apple collects data on your location, but that it logged it for up to a year in some cases.

Apple released a statement last week that called this a “bug” and said that the cache should only need to keep location data for about a week. 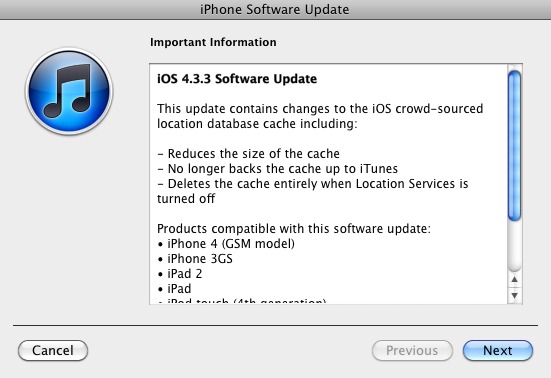 Next, the cache will no longer be backed up on iTunes. This was another point that concerned users. When you synched your device with your computer, the consolidated.db file would be copied onto your hard drive. Since the file was found to be unencrypted, many were worried about the location data falling into the hands of those who would use it for nefarious purposes.

Lastly, the cache will be completely deleted if the user turns off location services. Users were angry when they found out last week that the little amount of power they had when it came to location tracking, well, they didn’t actually have it. The iPhone was found to be logging data into the cache whether users had location services enabled or not. iOS 4.3.3 eliminates this issue.

So, how do you feel? Is this enough to assuage your fears? Has Apple now done enough to put the issue to bed? Some don’t think so, as one woman is filing a class action suit against Apple stating that Apple “collected the private location information covertly, surreptitiously and in violation of law.”