You might know of the famous Tim Berners-Lee, or even Al Gore, but most of you reading this have never heard of a man named Paul Baran. Which is a shame, cause he’s an engineer who created much of the technology which would eventually lead to the culmination of the internet.

Baran earned his master’s degree in Engineering from UCLA in 1959, and began working for the RAND Corporation that same year. Upon his hiring, he was charged with developing a communications system which could withstand a nuclear attack.

In order for data to be sent across a network of such a large size at ample speeds, the messages had to be broken down into what Baran referred to as “message blocks”. Once sent across the network, the blocks are then unraveled into their original message. This came to be known as “packet switching“, and is one of the fundamental ideas behind the internet.

Originally, Baran tried to sell his work to AT&T. They laughed and scoffed at his research, stating it simply wouldn’t work for voice communication. However, in 1969, the US government developed a system called the Arpanet. They used Baran’s ideas along with others to create a system which would stay online until eventually being replaced by the internet itself.

Baran’s contributions to modern day technology didn’t end with packet switching. He also developed tech which would be a part of the first ATM product. In 1985, he founded Metricom, which would become the first wireless internet company. The next time you walk through a metal detector, realize that a lot of Baran’s work went into those as well. 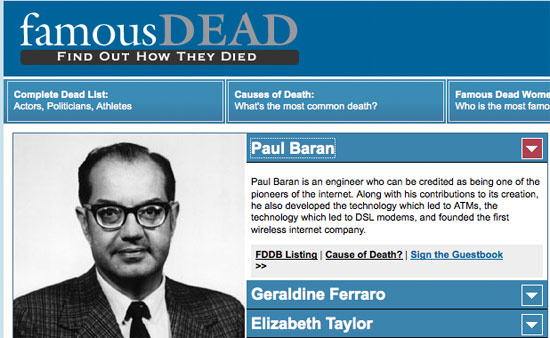 If you would like to learn more about the life of Paul Baran, or leave a message in remembrance of his work, you can find more information at FamousDead.com