According to a report released by Freedom House titled Freedom on the Net 2011, Iran is the worst country when it comes to online freedom.  The top three countries, in order, are Estonia, The United States and Germany.

The study judged countries based on three specific criteria: Obstacles to internet access, limits on content and violations of user rights.  They assigned each country a numerical score based on those criteria.  Countries scoring from 0-30 are designated “free,” countries scoring from 31-60 are designated “party free” and those with score of 61-100 are labelled “not free.”

Based on the same study performed in 2009, Iran changed the most negatively, with an addition of 13 points.  Georgia improved the most, subtracting 8 points from its score.

The study also group countries by region.  Out of the 16 countries studied from Asia, the Middle East and North Africa not one was given a ranking of below 30, or “free.”  Another interesting find was the incredible internet freedom in Estonia.  Other countries labelled “former Soviet Union” like Belarus and Kazakhstan did not perform very well.  About Estonia:

Today, with a high level of computer literacy and connectivity already established, the focus has shifted from basic concerns such as access, quality, and cost of internet services to discussions about security, anonymity, the protection of private information, and citizens’ rights on the internet. Local and international social-media services are used by more than 60 percent of internet users, and a majority of users conduct business and e-government transactions over the internet.

Go Estonia! (in my best Pauly Shore from Encino man) 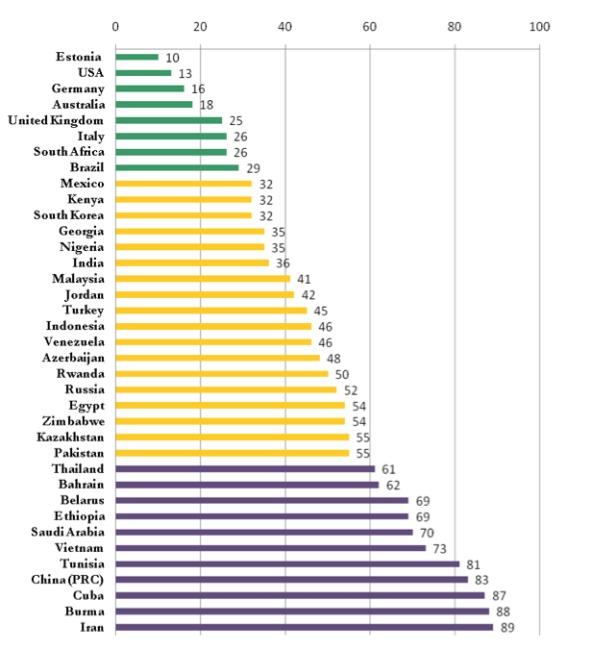 The United States received a score of 13 out of 100, the second best rating in the study.  Here’s what the study says about good ol’ Uncle Sam’s interwebs:

Access to the internet in the United States remains quite free compared with the rest of the world. Users face few restrictions on their ability to access and publish content online. The courts have consistently held that federal and state constitutional prohibitions against government regulation of speech apply to material published on the internet. In addition, statutory immunity for online service providers continues to play an important role in fostering business models that permit open discourse and the free exchange of information.

However, several developments in recent years have placed the government and internet freedom advocates at odds over aspects of internet regulation as well as issues surrounding online surveillance and privacy. The United States lags behind many major industrialized countries in terms of broadband penetration, and the strength and legal viability of recent rules concerning network neutrality remain uncertain. The current administration appears committed to maintaining broad surveillance powers with the aim of combating terrorism, child pornography, and other criminal activity, and it has been reported that the government is seeking expanded authority to control the design of internet services to ensure that communications can be intercepted when necessary.

In contrast Iran, received a score of 89 and placed last, making it the most prohibitive country in the study.  Here’s what they say about Iran:

Since the protests that followed the disputed presidential election of June 12, 2009, the Iranian authorities have waged an active campaign against internet freedom, employing extensive and sophisticated methods of control that go well beyond simple content filtering. These include tampering with internet access, mobile-telephone service, and satellite broadcasting; hacking opposition and other critical websites; monitoring dissenters online and using the information obtained to intimidate and arrest them; ordering blogging service providers inside Iran to remove “offensive” posts or blogs; and trying to fill the information vacuum created by these measures with propaganda and misinformation.

Check out the whole report on a pdf, here.  It’s a long read but an interesting one.