If Your Blog’s Mobile Experience Sucks, You’re Throwing Away Traffic

So, we’re sitting in the opening Keynote at BlogWorld in Vegas. Scott Stratten of Unmarketing is talking about "awesome content". You’ve heard the general spiel before, but he’s making plenty of valid points, including some that often go overlooked.

For example, "You’re killing your content" if you’re not offering a legitimate way to access it mobile. This doesn’t mean just letting users access it via the regular web site, making them zoom in and what have you. "Kiss my ass!" Stratten says. "I don’t want to zoom." 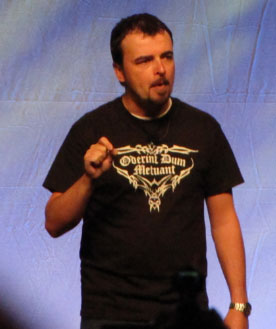 He also made the point that if your post takes too long to load, nobody wants to wait (and in some cases pay because of their data plans) to read it.

If you don’t have your content mobile-ready, you’re losing readers. You’re losing "passalong". If they don’t read it, they’re not going to share it, and a growing number of people aren’t going to read it if it’s not easy to read from their phones.

You may think most of your audience doesn’t read from mobile, but chances are, potential readers have already stopped visiting your blog because of the lack of a good mobile experience.

Something like 150 million of Facebook’s users are regularly using the social network from their mobile devices, according to Stratten. Consider that.

Make sure your mobile experience is good on Android, iPhone, BlackBerry, etc.

The mobile thing is only one of many points Scott discussed. If you want to see the keynote in its entirety, we’ll have video available shortly. Check live.webpronews.com soon. Warning: he calls iPhone users douches. He does mention that he has an iPad though.

NASA And Gowalla Partner On Virtual Search For Moon Rocks