Hulu Should Be Better at What it Does

Late last week, a deal between FOX and DISH Network came to an end, leaving DISH Network subscribers without FX, FOX Sports, and the National Geographic Channel. FOX raised their rates and DISH didn’t want to pay. While the two companies continue negotiations, some of us wonder how we are going to watch the shows that we regularly enjoy.

There are at least 5 shows I regularly watch on FX, and I have DISH Network, so naturally, this presents a problem for me. 3 of these shows are currently in mid-season. Now, I get to figure out where to watch the next episodes. My first thought was Hulu. They have FOX and (FOX-owned) FX content. I remember watching full episodes of "It’s Always Sunny in Philadelphia" there some time ago. I remember that they even had episodes a week after they aired. I can deal with that if I have to.

Too bad they don’t do that anymore.

Looking at that show’s page now, there are no full episodes available, let alone the newest ones. Now the show’s page on Hulu says they’re able to post new episodes 30 days after they air, starting later this month. The same goes for "The League". The Same goes for the "Sons of Anarchy". Awesome. Thanks Hulu. Thanks FOX. 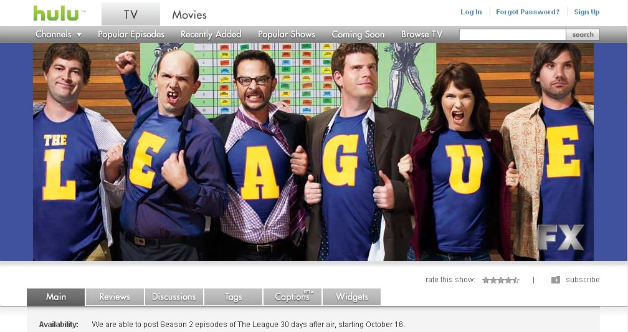 AdAge has an interesting and timely article about a speech given by Hulu CEO Jason Kilar this week. According to the article, he basically told the "big media" to either serve consumers or lose them. AdAge’s Nate Ives reports:

That’s particularly true because media consumption is basically an optional activity, he said. It’s habitual and important for most of us, he argued, but no one’s going to actually die if they don’t see the latest episode of "30 Rock." And within media, as the magazine publishers in the room were well aware, mushrooming options mean you’ve got to serve consumers or lose them. It’s no sure thing that a young person’s going to watch "The Amazing Race" instead of visiting Facebook. "Content is discretionary, so you better focus on convenience," he told the audience.

Convenience. What a concept. It seems like FOX is going out of its way to make it as inconvenient as possible for me to see the shows I watch. Meanwhile, DISH claims to be keeping up the fight.

"We regret that FOX Networks, the owner of some Regional Sports Networks, FX and National Geographic Channel, removed their channels from the DISH Network line-up," the company says.  "FOX has demanded a rate increase of more than 50%. An increase this large would force DISH Network to pass these costs on to our customers, which we are unwilling to do during these tough economic times."

"DISH Network will continue to work tirelessly for a fair agreement in order to bring these channels back at the earliest possible time."

Maybe we’ll get lucky and they’ll bring the channels back in time to see episodes that haven’t even aired on Hulu yet, so we’ll either have to DVR them while we wait to be caught up.

By the way, none of these shows are even available on Hulu Plus for $9.99 a month.