New numbers are out with respect to the U.S. online video landscape, and, to be perfectly honest, they’re quite similar to the old numbers.  But according to comScore, at least one noteworthy thing happened in December: Hulu made its way back onto a top ten list.

Hulu’s been on the edge as of late.  In October, it came in tenth among video sites in terms of total unique viewers.  Then Hulu, despite all the backing it’s received from ABC, Fox, and NBC, was absent from the November list.

Now comScore’s put it just behind Turner Digital with 26.5 million visitors in December. 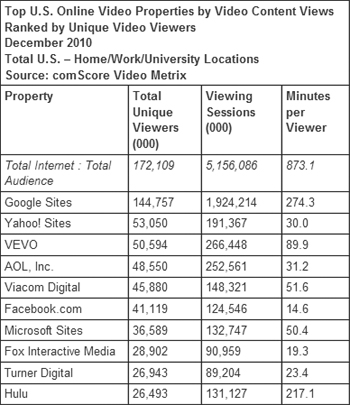 Otherwise, Google’s still very much on top, and Yahoo’s in second place.  VEVO secured third place, AOL came in fourth, and fifth place went to Viacom with Facebook not far behind.  Next, Microsoft and Fox got seventh and eighth, respectively.

As for some more basic info, comScore reported in a statement, "172 million U.S. Internet users watched online video content in December for an average of 14.6 hours per viewer.  The total U.S. Internet audience engaged in nearly 5.2 billion viewing sessions during the course of the month."

We’ll be sure to check in again when the report on January’s released.