Earlier this week, I asked how much content is too much? The premise is that the web and search engine results are being saturated with content in all areas, and most of it is coming from a handful of companies – companies like Demand Media and AOL/Huffington Post.

Demand Media has come under plenty of fire, and even more so in recent weeks on the heels of its IPO and Google’s indications that it is looking to improve search quality by going after content farms. The timing of the AOL acquisition of The Huffington Post plays right into this storyline.

Criticism is not a new thing for the Huffington Post, but given the company’s new acquisition and these other events, the spotlight is really on the HuffPost’s model now.

"The media-saturated environment in which we live has been called ‘the information age’ when, in fact, it’s the data age," he writes. "Information is data arranged in an intelligible order. Journalism is information collected and analyzed in ways people actually can use. Though AOL and the Huffington Post claim to have staked their future on giving visitors to their sites online journalism, what they actually provide is ‘content,’ which is what journalism becomes when it’s adulterated into a mere commodity." 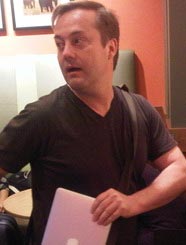 Jason Calacanis, who runs Mahalo, spoke at Federated Media’s Signal event this week, where he reportedly said that 80% of the Huffington Post is simply rehashing of other people’s content, and that "It’s mind blowing to me when I see the Huffington Post beating the people who are doing the original reporting" in Google (via Danny Sullivan).

Calacanis also reportedly asked advertisers not to support poor content after showing a Mahalo article deemed higher in quality, compared to eHow articles on the same subject. "You shouldn’t put your ads next to sub-par content. We will not make content unless we have an expert. Demand Media will make content if someone will take $10," he is quoted as saying, adding, "Google is figuring it out. eHow makes Google look stupid."

Demand Media CEO Richard Rosenblatt has gone out of his way in the past to separate his company’s content from journalism. "Only the journalists call it journalism," he said about a year ago at SXSW. He had a point. How to articles are quite different from current events. Current events, however, are the HuffPost’s specialty. And comments from Rosenblatt in an IPO roadshow document from Demand Media seem to suggest that current events aren’t out of the question for DM. "We don’t, today, do news," (emphasis added).

As we’ve said all along, it’s really up to Google and the other search engines to solve the problem of lackluster quality in search results, though as Sullivan points out in another piece covering a Demand Media session at the Signal event, sometimes there just aren’t any quality results for a query. The content farms preach the importance of quality, and the quality is indeed there sometimes, but it’s clearly not across the board, and many suggest that the wages (if any) earned by contributors simply aren’t enough to foster quality content.