This morning, HubSpot released a fresh "State of the Twittersphere" report, and in just about every respect, the news for the site is good, meaning growth has occurred since the last time HubSpot checked in.  The only potential problem relates to the rate of new user growth, which is rather slow.

Below, you can see a graph of Twitter’s monthly growth rate.  It hit 13.0 percent in March of last year, but in October, was nearer to 3.5 percent.  That’s a sort of keeping-up-with-inflation figure, not something that an international hit is supposed to generate. 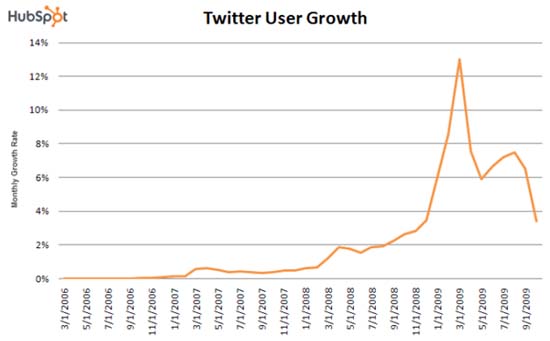 Making matters worse, of course, is the fact that Twitter’s growth rate appears to have still been on the decline in October.  If Twitter doesn’t manage to do something about it, it’s hard to imagine that the site will be able to hold users’ (and potential paying users’ and advertisers’) interest.

Still, Twitter’s doing all right for now.  Indeed, loyalty among its existing users actually seems to be increasing.

HubSpot reported that the average Twitter user has become more engaged since July, following more people and making more updates.  More users have supplied bios, Web addresses, and their physical locations in their Twitter profiles, too.