How to Remove Circle Counts in Google+

In Google Plus, there is a pretty new option: you can stop people from seeing your follow counts publicly. You can specifically decide if you want to show who you have in your Circle and who has added you to their Circle. If you are interested in doing this, here is how you remove the circle counts in Google+ Plus.

First, you need to go to your profile. My profile is located at http://gplus.to/bhartzer

Once you are at your profile, follow these steps:

2. On the left side, you will see “In Bill’s Circles” (where Bill is your name). 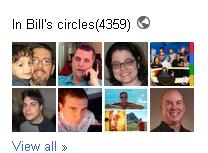 3. Click on the little World Globe symbol to edit. 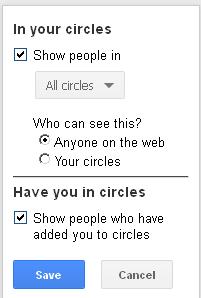 4. You will see the popup above.

If you want to show people in all circles, then select the checkbox. You might only want to show certain counts in certain circles.

If you want to show people who have added you to circles, then select the checkbox. Otherwise, if you want to stop all of the circle counts from showing publicly, then uncheck both boxes.

So, it’s really up to you. I have to be honest, and tell you that I personally prefer to show all of the numbers. I think that’s really the best policy, to be as completely transparent as possible.

Check out BillHartzer.com for more articles by Bill Hartzer

Larry Page: Google+ Has Over 10 Million Users (And Other Stats)