How The Twilight Saga: Eclipse is Marketed Online

Online ad firm Unicast reached out to us to talk about how it is helping the makers of The Twilight Saga engage the series’ fanbase online "where others have failed", and how the film industry is increasingly looking to online ad platforms to drive sales.

"With $710 million box revenue for The Twilight Saga: New Moon, it’s no surprise the film’s distributors are looking to go bigger in its marketing efforts and ensure they promote to its loyal fanbase to score a similar or bigger theatrical climactic success around the July 4th weekend," a representative for Unicast tells WebProNews. "Online marketing continues to grow in this sector year over year, with up to 20% of ad budgets being spent in this space." 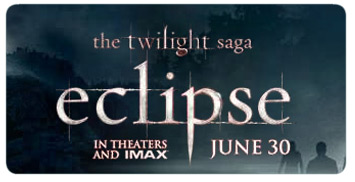 Working in partnership with Unicast again, four rich media campaigns for Eclipse (the third installment, opening later this month) have been developed as homepage roadblocks on MySpace to target core audiences. The campaign for this film allows fans to once again use Movie Finder/Geotargeting to book local tickets, to post to social media networks, and to view trailers, but has also extended its interactive ad units to allow audiences to track fellow fan buzz via social media, organize viewing parties with other fans, and buy the soundtrack.

MySpace obviously plays a huge role in the marketing of this film, but fans are engaging via Facebook and Twitter as well. This Eclipse Facebook page has over 21,000 likes, and the official Twitter profile for the series has over 321,000 followers.