How Is Google’s Algorithm Update Determining “Ads Above The Fold”?

Less ads intruding on quality content, it’s a simple concept – right? When the majority of us visits a website, we’re visiting to get something we want. When an obstacle is in our way from the main goal, we tend to get upset. Obviously, Google doesn’t want to feature the sites that make their users upset. Sounds like a simple enough formula.

We’ve seen Google’s answer to the problem of clogging ads above the fold; by way of an algorithm update. The two words that site owners and SEO experts dread like the Ghost of Christmas Future.

As with many algorithm updates, the problem rests with the general and arbitrary information shared to everyone regarding it. Looking at the original blog post regarding the update, I could paraphrase it as such: “We’re rolling out an algorithm update which will penalize websites with too many ads above the fold, it should affect 1% of searches globally”

If you’re a user then you’re probably clapping and cheering Google for this update. If you’re an SEO expert, or an owner who’s sole income comes from a website or group of websites then depending on how neurotic you are, you’re either slightly concerned or freaking out.

The reason for the concern is so much of a site’s success is dependent on key points of data, and many times specific numbers, ratios, and trends involving this data. When generalities are used, it’s hard to gauge what is needed in order to be successful.

Which is why so many owners and experts become concerned when they encounter an update such as this one. Questions like this instinctively arise:

– How many ads are too many? Is there a specific number?

– If it isn’t based on the number of ads, is it based on the amount of space they take up? Is one huge ad as penalized as a site with a lot of smaller ads?

– Is there a specific resolution Google uses to determine where the fold actually is? If so, what is the resolution?

– Is Google only targeting Adwords, or is there a collective database of ad networks they’re targeting? Is there a shared element in various ad codes where they’re able to determine what is or isn’t an ad?

Depending on your level of concern, these questions feature an assortment of capital letters and other colorful words. Let’s do a quick visual exercise to dig deeper into this update.

First, where do intersticial ads and pop-ups come into play regarding this update? Really, they’re the Men-in-Black of ads when talking about layout, as they work outside the system. However, they can be just as intrusive if not more so than banners and other page ads.

Which would be considered worse in Google’s update?

This, IGN’s front page which has a single ad that expands to take up nearly half the page (based on where the fold is on my screen) … 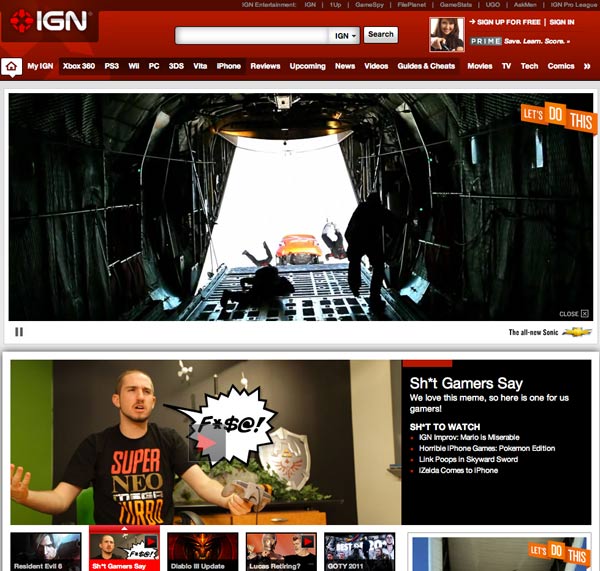 Or, Rottentomatoe’s front page which has a banner, video ad, and a background ad? In terms of “being above the fold”, the content/ad ratio isn’t technically as bad. 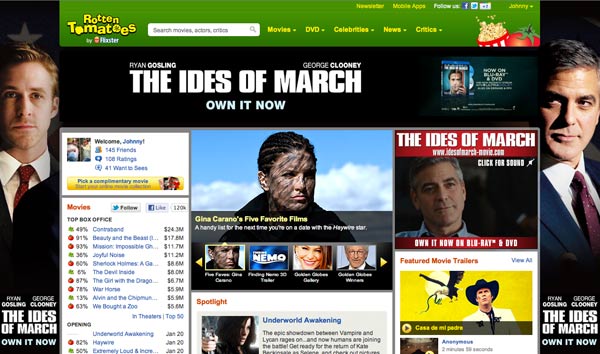 You then have Forbe’s strategy which loads a timed intersticial, an ad that gets its very own page. How is Google viewing this in their new update? 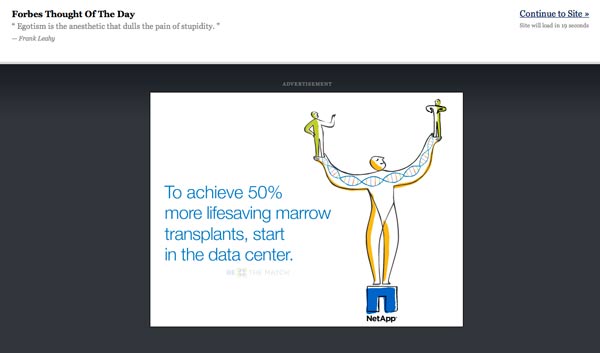 The matter of intersticial and pop-ups brings a whole new element into the mix. Is Google penalizing sites on ad/content ratio averages, or are they targeting specific pages? Certainly, if they’re only targeting specific pages when they’re penalizing then having interstitials and pop-ups seems like it would be more beneficial to a site than relying on trying to gauge how many ads above the fold is too many.

In conclusion, after all the questioning and worrying, the mantra of Google still rings true – try to create the greatest user experience possible. There is definitely a common sense element at play, but we still don’t know where the line is and if a site is even crossing it.