How Important are Comments to the News?

Comments have become part of the news. In the old days, publishers released articles and any reader comments would be addressed on the publisher’s own time. In a newspaper or magazine, it may have been in the form of letters to the editor. Sometimes news radio programs would read audience feedback on the air. These things allowed the publishers a great deal of control over the commentary associated with their story.

The web, blogs, and social media have since opened up the floodgates of commentary, and there is really no stopping anybody from saying anything related to a specific news story and not being able to get that comment read. That could come in the comments on a web article itself, it could be on Twitter or Facebook. It could be a whole new post started on another blog. There is no containing conversation on the web.
All in all, that is a good thing. It means free speech, and it means that any fact, opinion, or slant can be heard, and perhaps more importantly disputed by the masses.

The worth of blog comments is a subject that is debated from time to time throughout the news industry and the Blogosphere. The subject has been thrust into the spotlight this week, as popular tech blog Engadget has decided to temporarily shut its comments down. In a post announcing it decision, Engadget wrote:

Hey guys, we know you like to have your fun, voice your opinions, and argue over your favorite gear, but over the past few days the tone in comments has really gotten out of hand. What is normally a charged — but fun — environment for our users and editors has become mean, ugly, pointless, and frankly threatening in some situations… and that’s just not acceptable. Some of you out there in the world of anonymous grandstanding have gotten the impression that you run the place, but that’s simply not the case.

Luckily, our commenting community makes up only a small percentage of our readership (and the bad eggs an even smaller part of that number), so while they may be loud, they don’t speak for most people who come to Engadget looking for tech news. Regardless, we’re going to crank things down for a little bit to let everyone just cool off, and we’ll switch them back on when we feel like we’ve shaken some of the trolls and spammers loose from the branches (AKA swing the banhammer in our downtime). See you on the other side! 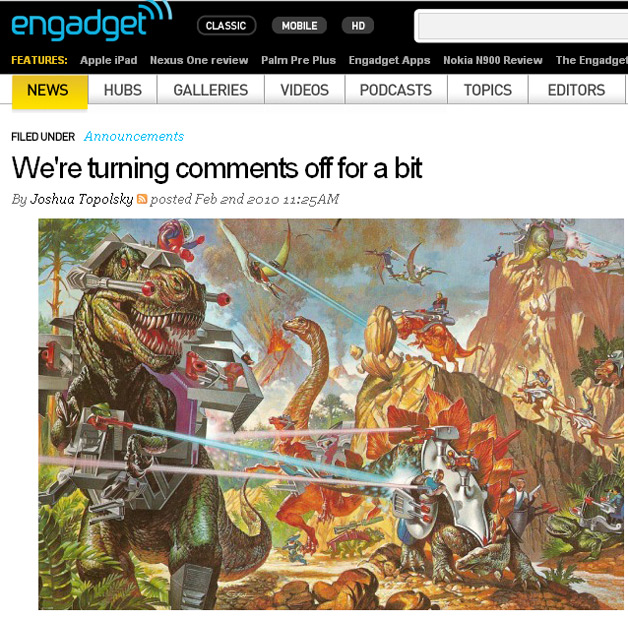 Engadget has taken a fair amount of criticism for shutting down comments completely, even if it is only temporary. The fact that it is even a topic of debate shows the significance of comments to the way readers get their information. People want to see what others say. It adds to the story, and can often make the original piece more interesting. Even if the readers who actually comment are the minority, people still like to read what others have said. It can help them gauge the credibility of a story, or simply gain more insight into the topic being discussed.

Comments are not always useful or productive. Sometimes they are offensive. Sometimes they are just spammy. In fact, it has been discussed that such comments may actually hurt the search engine friendliness of your page. However moderating comments well can presumably help you avoid anything like that (although sometimes that is easier said than done).

Is such a risk worth closing the door on reader responses anyway? If people have something to say about an article or blog post, they’re going to find somewhere to say it. Allowing comments encourages that to be said right there, and frankly makes it easier to keep up with. If, for example, someone disputes a claim you make via Facebook or Twitter, you may miss it and not have a chance to defend that claim (granted, there are ways to incorporate the conversation from FB, Twitter, etc. into comments on a blog).

Stan Schroeder at the all things social media blog Mashable asks a good question, "How important are comments in this age where a lot of commenting is happening off-site — on Twitter, Facebook and other social networks?" He also points to Apple analyst John Gruber’s Daring Fireball blog, which doesn’t allow comments, but another site has been set up by others just to provide comments about the articles from that blog. According to CultofMac, it pulls in the articles via RSS (including the ads). It’s even called DaringFireballWithComments.net.

That is another clear indicator that not only will people find a way to comment if they want, but readers find the commenting process important. Do you agree? Should all blogs have comments? Should they ever be shut down entirely? How important are comments to your blog? How important are they to the news in general. We’d love to hear your thoughts.

Majority Of E-Reader Owners Have No Complaints